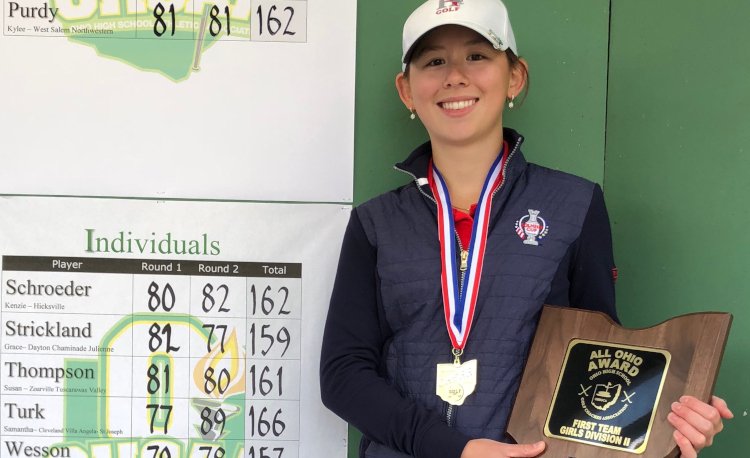 The third time was the charm for Hawken junior Ella Wong, who won the Division II state golf title on Saturday at Ohio State University’s Gray Course in Columbus.

Wong, who previously placed 17th and eighth at the state tournament, shot a 146 over the two-day event to win the title.

“I was elated and proud that my hard work paid off,” Wong said. “This was a great way to end the season and I am very happy that I was able to share the experience with my family, coach, and teammates.”

Wong opened the tournament with a tournament-best 71 in Friday’s first round with two birdies, 13 pars, and three bogeys.

She closed out the day two strokes ahead of Shelby’s Nicole Jones, who placed second.

“Knowing the weather for the second round, I knew that I had to shoot a low score on the first day to be competitive,” Wong said. “I was pleased with my score of 71, but it did not help me relax heading into the second day. Although I was the leader after the first day, I did not consider my two-stroke lead on day two because I play each round as if it is a one-day tournament.”

Saturday’s second round proved to be more challenging for Wong, who scored par on 13 holes and carded a bogey on the other five.

“The course was a lot more challenging to play the second day due to the wet, cold, and windy conditions,” Wong said. “The rainfall from the previous night prevented my drives from rolling as far as the first round, and this made hitting greens in regulation more difficult on the longer par 4s. I also had to adjust my targets and club selection due to the wind. I remained focused by playing one hole at a time and not dwelling on my prior scores. The support and presence of my family, teammates, and coach at the tournament also helped me remain positive and persevere through the round.”

With her state title secured, Wong will spend the offseason preparing to defend her championship next fall.

“I am going to work on hitting my approach shots closer to the hole to get more birdies and not stress my short game,” she said. “I will also be working to increase my swing speed so that I can reach the long par 3s and 4s more easily and confidently.”

Independence placed 10th as a team at the tournament.