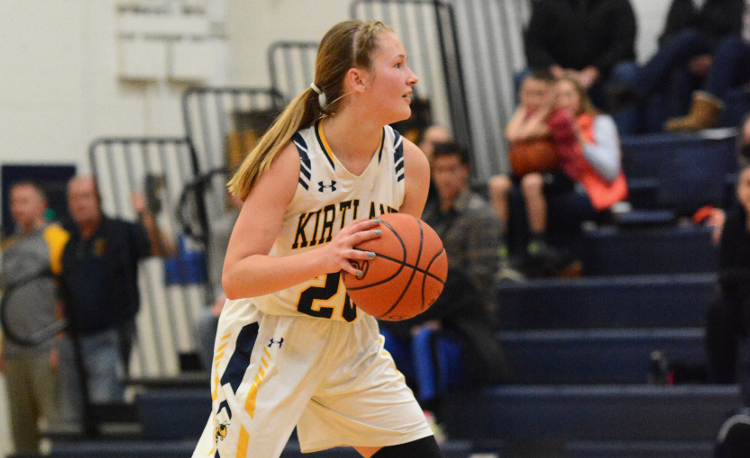 Kirtland manhandled host South in the rebounding department on the way to a 64-30 nonconference win on Monday.

The Hornets pulled down 40 rebounds while South grabbed just nine.

“We had some concerns about South because they have been playing very good basketball as of late and they have been making a lot of threes,” Kirtland coach Bob Bell said. “We needed to step up and pressure those outside shots and play good, solid defense. That was our focus going in and I think our girls did a really nice job of defending them.”

Lauren Lutz led the Hornets with 11 rebounds while Grace Wolfe finished with 10.

“I think we were a little quicker maybe in getting into position and getting to the ball,” Bell said. “Lutz has some quickness to her and so does Grace. We just knew we had to be aggressive in order to take control of the game and the girls stepped up real well tonight and did that.”

The Hornets wasted little time in taking control of the game.

“South came out and played their usual aggressive game but our kids responded to it quite well,” Bell said. “Our girls played really well, both on the offensive end as well as on the defensive end, and in the rebounding department.”

Point guard Lauren Snyder and Wolfe tied for a game-high 15 points for the Hornets.

“There’s your one and that’s your five,” Bell said. “There’s nothing like being strong up the middle.”

Amber Yurick and Jenna Sayle also scored in double figures for Kirtland with 13 and 11 points, respectively, and Julia Camino contributed with six points.

“We got good play out of everybody,” Bell said. “Amber Yurick played really well in contributing 13 and Jenna Sayle is always solid. We also got really good bench play. Julia Camino comes in and she’s consistent and plays hard. She scored six points and played great defense. You just need players like that. They come in and you can count on them.”

Mya Matriano and Hanna Blasinsky each scored six points for the Rebels.

Kirtland improved to 10-4 overall. The Hornets travel to Harvey on Thursday. South hosts Brush on Wednesday.