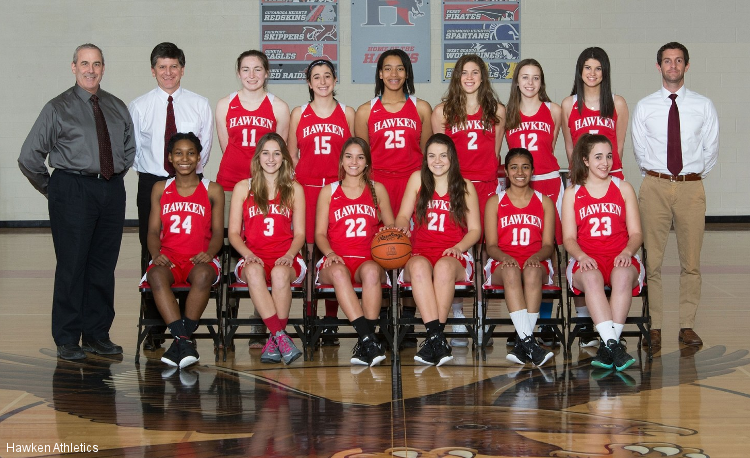 Makayla White and Maya Dori both scored 10 points to lead Hawken to a 46-31 nonconference win over visiting Canton Central Catholic on Monday.

The Hawks, who have won two straight games, are now 5-8 on the year.

“As a team, we did a nice job of applying defensive pressure, both full court and in the half court,” Hawken coach David Murray said. “We were able to generate some turnovers and force them into contested shots. We also rebounded well on the defensive end, which helped limit them to one shot or fewer per possession.”

“I think that patience and sharp passing were two keys to our success on offense,” Murray said. “We had nine different players score in the game, which is a testament to the girls’ outstanding ball movement. We were also able to score in a variety of ways with jump shots, drives, and off of offensive rebounds. When you’re able to be dynamic as an offense, it puts a lot of pressure on the defense and prevents them from focusing in on one thing.”

Hawken’s defense was sharp in the first half as it limited Canton Central Catholic to just eight points in the first quarter then held the Crusaders scoreless in the second.

The Hawks didn’t let up in the third quarter as they took a 31-12 lead into the final eight minutes of play.

“As a program, we emphasize making the most of every opportunity and getting better every day,” Murray said. “We recognized that we did not convert a lot of scoring opportunities in the first half, so we went into the third quarter looking to improve in that regard. We also wanted to make sure that we maintained and built upon the defensive effort of the first half.”

The Hawks now have built up some momentum as they head into the final stretch of the regular season beginning with Wednesday’s nonconference game against Garfield Heights and then three straight Chagrin Valley Conference Chagrin Division games.

“I’m very proud of the collective team effort,” Murray said. “We’re in the middle of a really important stretch of our season with four games in eight days, so we’re looking to come out, have a great practice, and keep the momentum going.”