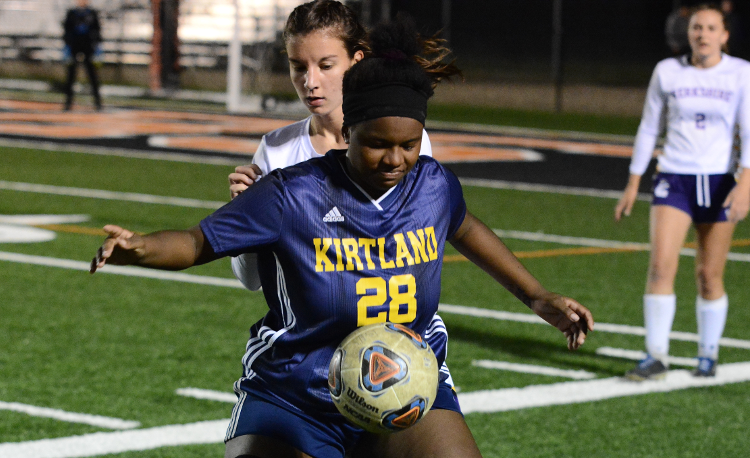 WARREN—Leah LaVerde’s finish on a loose ball with 13:28 left in the first half carried Kirtland to a 1-0 win over Berkshire in the Division III Chagrin District championship game at Howland Stadium on Thursday.

With the win, the Hornets advanced to Tuesday’s OHSAA regional semifinals against Doylestown Chippewa at Medina High School. The district championship is the third straight for the Hornets, who improved to 15-4 overall.

“I’m proud of how we played,” Kirtland coach Ed Bradac said. “There were 10 minutes in the second half that were a little iffy, no doubt about it, but we made another adjustment and that settled it for the rest of the game.”

Kirtland, the top seed in the Chagrin District, had beaten Berkshire, the third seed, 4-2 in the regular season after trailing 2-0, so the Hornets knew they would have their hands full with the Badgers.

Bradac stuck to his game plan of possessing the ball, distributing it through the midfield and crashing the goal.

That strategy paid off when LaVerde was in the right place at the right time to punch in a deflection of Erika Zschuppe’s shot from the left corner of the box to give the Hornets a 1-0 lead late in the first half.

The Hornets didn’t let up on the offensive end but they never lost sight of Berkshire’s leading scorer, Lexi Boyk, on the defensive side of the field.

“We’ve always talked about it being tournament soccer and we possessed, probably the first 35 or 40 minutes, we possessed the ball,” he said. “To their credit, they had a couple of opportunities and Lexi is everything we talked about for the last four years. I love and adore the girl; she is a very good player.”

A lineup change late in the season that moved Lidia Rodin from offense to sweeper helped the Hornets to shut down Berkshire’s fast-break offense.

“The neutral aspect to that is Lidia,” Bradac said. “As soon as we put Lidia back, as a team, we had a comfort level.”

“At any one moment, it was one v. five and then we made a decision with about 10 to go to pull Erika back in the midfield and we threw Maya up top and now they’re trying to figure out what to do with her and we had more opportunities that last 10 minutes,” Bradac said. “We just couldn’t find the back of the net. We out-possessed them, we had more corner kicks and free kicks, we just couldn’t find that second goal. If you find that second goal the game is much easier.”

Kirtland improved to 11-0 all-time against Berkshire.

The Hornets will play Chippewa for the third time in the postseason since 2015. Kirtland beat the Chips in the 2018 regional championship game, 3-2, but lost to Chippewa in the 2015 state semifinals, 1-0.

“We’ll study, we’ll get ready and we’ll meet them on Tuesday,” Bradac said.

Berkshire closed out its season with an 8-7-2 record after playing in the big-school division of the Chagrin Valley Conference for the first time.

“It’s something we can build off moving forward,” Berkshire coach Ian Patterson said. “We knew we had our work cut out for us coming here tonight. One of our goals was to hold Zschuppe scoreless and we thought if we could do that we’d have a good chance. We did and it was a 1-0 result, so we were in it, we just couldn’t finish anything.”

The loss concluded the careers of Berkshire’s seniors, who helped establish the team into one of the top Division III programs in Northeast Ohio.

“They’ve completely turned this whole school around for soccer,” Patterson said. “Before these girls, I went through the program on the boys’ side and there wasn’t much of a boys program when I was there, so these last couple of years they’ve really made themselves known as a soccer school. With these 12 freshmen his year, they’ve really helped them progress and getting them to the district finals playing a good Kirtland team should be good for us moving forward.”