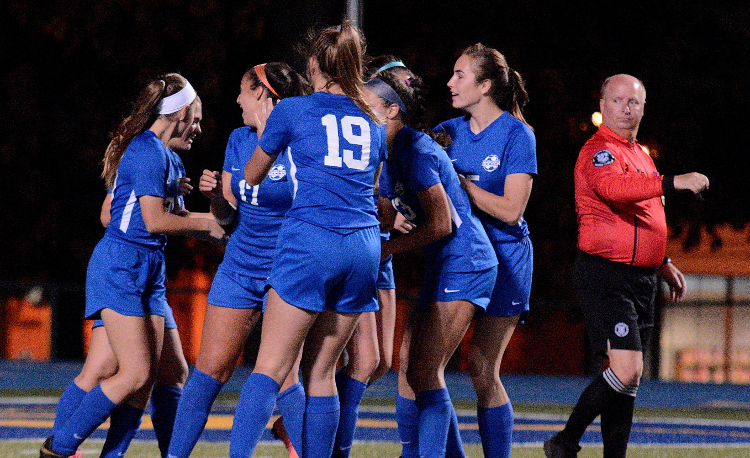 Somehow you just knew that it would end this way.

When you have two girls soccer teams from the same conference competing for a Division III district title, two teams that are called Blue Devils, two teams whose school colors are blue and gold, two teams that have never competed in a district final before, two teams that played to a 0-0 tie earlier in the season, you just knew that it would have to go into overtime.

There were too many similarities for it not to.

That’s just what happened Thursday at Strongsville High School, as Molly Dougherty connected on a penalty kick 5 minutes, 7 seconds into the first overtime to give Independence its first district crown in girls soccer, taking a 2-1 victory over Wickliffe.

Independence, 13-3-3, next will play Warren JFK, at 7 p.m. Tuesday at a site yet to be determined by the OHSAA. JFK won the Niles district title, upsetting top-seeded Leavittsburg LaBrae, 3-2. Wickliffe bows out at 10-5-4.

“This is our first,” Independence coach Bryan Less said of the district crown. “We’ve never been this far before.”

Dougherty put the finishing touches on the hard-fought victory, connecting on her fifth successful PK of the year, which accounts for half of the goals she has scored this season.

“She is our first choice,” Less said. “She has never missed one in her career. I think she’s already hit five this year. She’s automatic.”

The senior team captain was able to use that experience to her advantage, despite the fact that this time it was on a much bigger stage than ever before.

“I’ve taken a lot of PKs throughout the season,” she said. “The first thing that came in my head was, ‘Don’t panic. Take your time, relax, you got this. Once you pick your spot and commit to it, it will go in.’”

Dougherty used her right foot to hit the ball low and to the right, and Wickliffe goalkeeper Kaylee Lauriel had no chance to make the save.

The penalty kick came about because of some strong individual play by Riccela DiGeronimo, who scored Independence’s other goal. The junior found herself battling two defenders, one of whom fell to the ground after a collision. When she got back up, she appeared to be off-balance, falling into DiGeronimo and taking her to the turf.

“From my perspective, there was a collision in the box and our defender went down,” Wickliffe coach Steve Gribovicz said. “Play continued on, she got up and I’m pretty sure she was still trying to get her bearings back and she ran into the player, forcing the PK.”

Less had a slightly different version of the play.

“Riccela did a great job,” he said. “She won the ball and there was a collision. The girl went down and the second defender came over. Riccela is a really good basketball player, and she used the girl who was on the ground like a pick. On the cutback, the girl took her out and we got the penalty kick.”

Despite all the similarities noted above, the teams actually were quite different. Independence played a controlled passing game, working the ball up the field, while Wickliffe was much more physical and tried to get players into the open field after long passes.

The differing styles resulted in Independence possessing the ball for a great majority of the contest.

Not surprisingly, Independence had 10 shots on goal to just three for Wickliffe. In fact, Wickliffe didn’t get its first shot on goal until 20 seconds into the second half.

DiGeronimo opened the scoring with 32:19 to play in the first half on an assist from Dougherty. She got the pass on the left side, moved in to about 15 yards away and sent a left-footed shot across the mouth of the goal and into the lower right-hand corner. Again, Lauriel had no shot at making the save.

That goal stood up for nearly 60 minutes, and it appeared Independence might sneak away with a 1-0 victory. But Wickliffe started getting more chances in the second half because of a halftime adjustment.

“The first half we wanted to come out with a defensive game plan,” Gribovicz said. “But what was going on was we weren’t pushing up a level. Our defenders were too far back and not marking players. In the second half we made an adjustment to bring our defenders up, and that allowed us to move everybody up a level, which resulted in us having some opportunities.”

It finally paid off with just 13:44 left to play, as Ana Stjepanovic found herself alone in the middle of the field about 25 yards out. Her right-footed shot went low and left and got past Independence keeper Reni Kaiser, making it 1-1.

There were no real scoring opportunities for the remainder of regulation play, and Independence took control right from the start of the overtime.

The Wickliffe defense turned aside a couple of dangerous opportunities after Independence corner kicks, but eventually, they were unable to keep DiGeronimo under control, leading to the winning PK.

“We’ve had a little bit of a problem finishing goals this season,” Dougherty said. “But the great thing about this team is we are able to bounce back, and that’s exactly what we did tonight.”