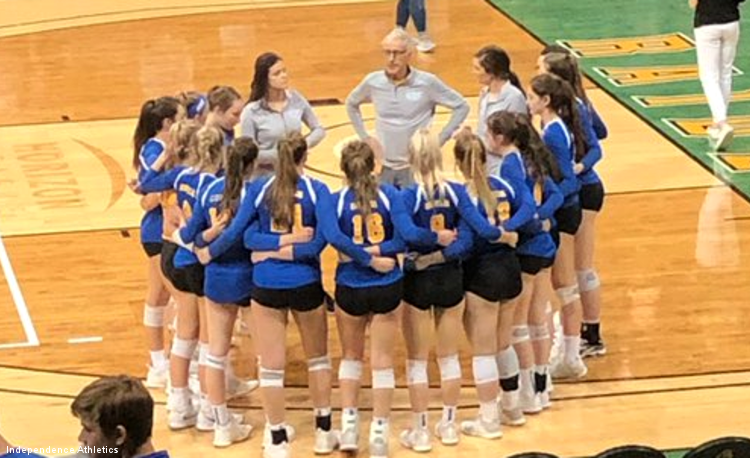 Wheelersburg entered Thursday’s Division III state semifinal with a record of 27-0 but the day belonged to Independence, who advanced to a second straight state championship match with a 3-0 win over the Pirates.

“We started out strong from the beginning and did a good job of keeping our energy throughout the entire match,” senior captain Katie Taliaferro said. “We did a great job of serving aggressively and getting them out of system. Our defense and serve receive were on today, and the blockers did a good job of getting touches at the net. We were focused from point one to the end and got it done.”

Wheelersburg made its first appearance at the state tournament after an incredible run that saw the Pirates win 76 of 78 sets played this season including a remarkable 73 straight heading into Saturday’s regional championship game.

“Being here the last three years is huge,” Taliaferro said. “Having the experience playing on this court really helped us, and we felt very comfortable today.”

The Blue Devils trailed just twice in the match—both times very early in the third set—and finished the day with a .287 kill percentage while Wheelersburg was held to .040.

Taliaferro led Independence with 15 kills and Grace Smotek and Hanna Wilson both finished with eight. Abby Avila led the team with 31 assists and Maddy Bilinovic posted a team-high 15 digs. Smotek and Macy McNamara contributed with 11 digs each.

“It was a great team win,” Taliaferro said. “We were focused and ready to go and I’m really excited to be in the state finals with this team. We’ve worked so hard for this opportunity. We don’t worry about individual stats; a lot of players on this team are capable of putting up big numbers. Abby was setting me in great spots today and our passers worked hard to get her the ball.”

The Blue Devils, ranked fourth in the state, will play No. 2 Liberty-Benton in Saturday’s state championship match. The Eagles (27-2) defeated Cincinnati Hills Christian Academy in the other semifinal, 3-0.

“We’re very excited,” Taliaferro said. “It’s an awesome opportunity for us and we can’t wait to get to work on Saturday.”