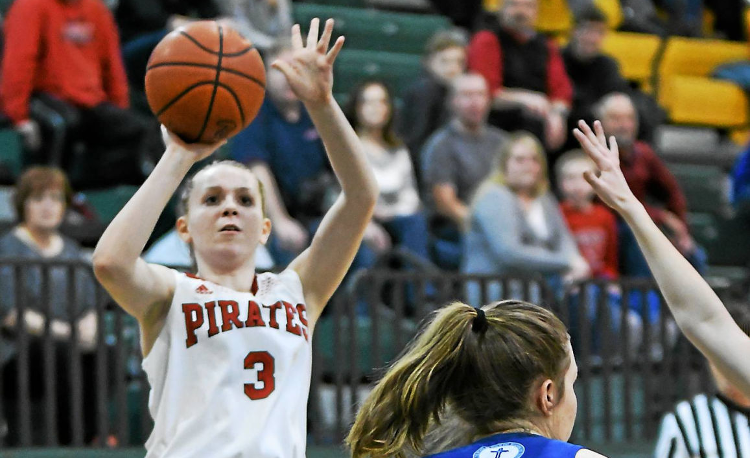 Perry opens the 2019-2020 with three returning starters from the squad that earned a share of the Chagrin Valley Conference Chagrin Division last season.

The Pirates have their sights set on repeating as league champs and making another deep postseason run.

“Our goals for the 2019-20 season are to win a CVC title, win the district title and win the regional title,” said Perry second-year coach Roy Infalvi, Jr. “In order for us to be successful this year, we need our players to take their game to the next level. We need to continue to get better day in and day out and not be complacent.”

Perry finished last season with a 21-5 record overall and a 13-1 mark in league play. The Pirates went on to win a district title before falling to St. Vincent-St. Mary in a Division II regional semifinal.

With three returning starters and seven others with varsity experience, Infalvi is eager to see what the Pirates can do for an encore.

“I am very excited for the upcoming season,” he said. “We are still pretty young but our young players had an opportunity to gain a lot of experience last season. We have the potential to be better than last season if we continue to work and progress throughout the season.”

Hacking, a junior guard, averaged 15 points, six rebounds and five assists per game on the way to earning first-team All-CVC and all-district honors and she also was named third-team All-Ohio.

“Madyson is a tremendously hard worker and is a leader on our team,” Infalvi said. “She is always working to get better and she is a great example to our young players. Madyson is our leading scorer and can score from anywhere on the court, but what I like most about her is the effort she puts on the defensive end.”

“Elle is one of the best shooters in our program and one of the best 3-point shooters in the area,” Coach Infalvi said. “That being said, she has worked really hard this offseason on other parts of her game. Defensively, she has good instincts and gets in the right position to make plays.”

“Gigi is probably the most versatile and athletic defender in the area,” Infalvi said. “She has the ability to defend a guard or a post. Last season, she missed the last eight regular-season games and the tournament with an injury and it hurt us both defensively and rebounding. We are glad to have her back.”

“Lauren has worked hard this offseason both on the court and off. She has improved her strength and her overall play on the court. She will play a key role in our success this season,” Infalvi said. “Sydney emerged last year to be a very good defender for us. We are looking for her to step that up again this year and be dominant on the defensive end. She works really hard and takes pride in defense. I love that about her.”

Rodriguez averaged four points and two rebounds per game while Tomoletz dropped in three points and pulled down two boards per contest.

“Marcela is very skilled and talented. She is more comfortable this year in our system and that will allow her to be more confident in what she is doing. Marcela will surprise a lot of people this year,” Infalvi said. “Jaylen has been working hard on the defensive end this year. She is tall and long and she is starting to take advantage of that. On the offensive end, she finishes well around the basket and she can shoot the three.”

Anderson stepped up to fill in when Vicini went down last year and finished with three points and four rebounds per game. Jean averaged two points and one assist per game.

“JC played a huge role for us last year. She may not have been ready, but she rose to the occasion and performed well when GiGi got hurt. We are looking for her to raise her game to the next level this year, especially on the defensive end,” Infalvi said. “Margaux has had a great preseason so far. She has become a very good distributor when playing point guard and defensively she has shown that she can guard in the full court. She will be counted on to play a big role for us this year.”

“We are not very tall overall as a team,” Infalvi said. “We have to be able to rebound consistently as a team for us to be successful. That means being in proper position to rebound and everyone doing their job together. In games, we need to limit turnovers by taking care of the basketball and win the rebounding battle.”