Independence headed back to state 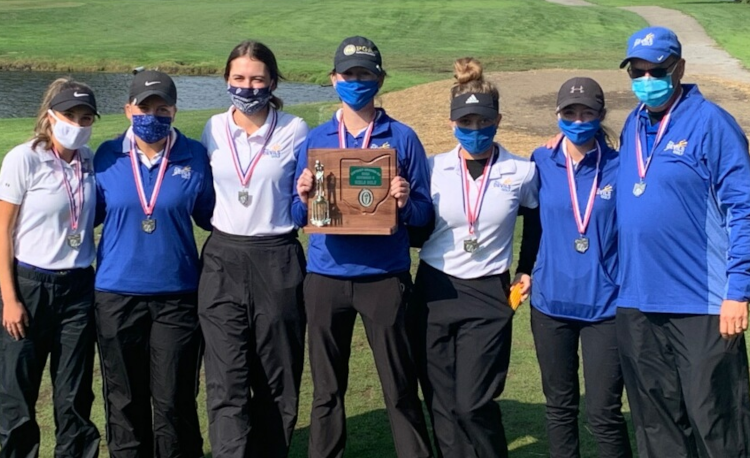 Independence finished second to Laurel at the Division II Sable Creek District Tournament and will return to the state championships for the third time in the last five seasons.

The Blue Devils finished with 374 strokes and will play in Columbus for the first time since winning the Division II state title in 2017. They finished as the state runners-up the year before.

“It was a great day,” Independence coach Karl Schuld said. “So many people have reached out. I don’t know how many texts I have received congratulating the girls. It’s just a testament as to how hard they’ve worked and the time and commitment they put into the program.”

Allie Ksiazka led the Blue Devils with an 83, which tied her for sixth place overall with Lutheran West’s Sam Webb.

Morgan Pascarella shot an 88, Reese Vilcheck carded a 96 and Molly McGreal closed out the scoring with a 107. Emma Konopa shot a 108 for the Blue Devils.

Ksiazka has peaked at the right time as she has posted the team-low score in Independence’s last three events.

“She has been on fire,” Schuld said. “She was a little concerned because her lag putting was off today but her tee to green was phenomenal. The conditions at Sable Creek were really tough so all of the scores were elevated today. The course isn’t very forgiving, it’s a placement course, and Allie just continues to hit fairways and greens. Her short putting was good but she was having some trouble with her lag putting.”

Pascarella, who was a freshman on the state championship team, posted another solid score to finish 13th overall.

“On her first shot, she just dead-panned it way left. She had to play out of that and somehow came out of it with a six. I don’t know how she did it, but that’s Morgan. She’s such a competitor and figures it out,” Schuld said. “She’s a little disappointed in herself but I’m certainly not. She always goes out and gets everything she can for the team and understands, probably better than anybody else on the team, what it takes to get to state because she golfed down in Columbus three years ago.”

Pascarella was the No. 5 golfer on the team that won the state title.

Sophia Trombetta is now golfing at Michigan while Lyndsay Blum led Otterbein’s women’s golf team with an average of 83.6 strokes per 18-holes last year as a freshman. Trombetta and Blum, as well as Madeline Mindzora and Maddie Harper, the other members of that state championship team, were quick to reach out to their former coach.

“It was really great today to get home and hear from Lyndsay, Madeline, Maddie, Sophia, the parents,” Schuld said. “That’s the nice thing about it. We’ve only been going for seven years (as a program). Somebody texted me and said it was a tradition but I’ve been blessed to be around a lot of good people and hard-working kids and a lot of parents who get it.”

Lutheran West finished seventh as a team and Hawken was eighth. Only the top three teams and top three individuals not on a qualifying team advanced to state.

Hawken’s Ella Wong will join the Blue Devils in Columbus as she tied for first place with a tournament-low 75. Wong, a sophomore, placed 17th at state last season.