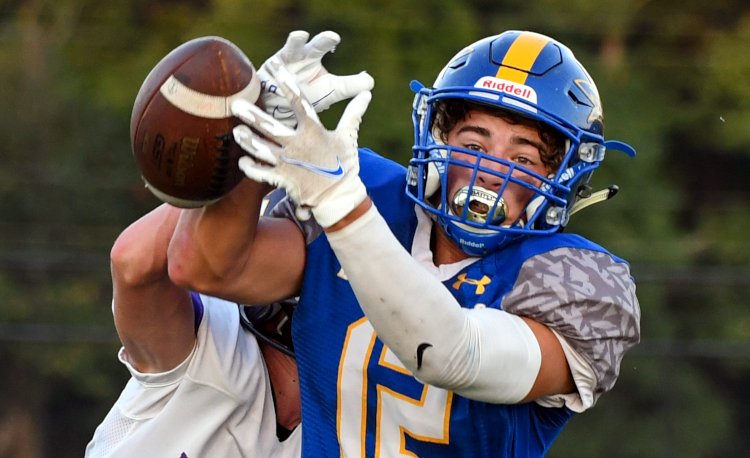 With the win, the Blue Devils improved to 5-1 and extended their winning streak to five straight games.

“The challenge was playing on a Saturday night,” said Independence coach Rick Adams. “It was different for the kids as far as being in their routine, so we came out a little flat. We’ve got to do a little better job of getting them ready but they responded. Our first drive was pretty good and defensively, we came out and forced a punt and the offense went down and scored. We just have to keep that momentum going when we get up like that. We kind of let them get back in it.”

Independence took a 7-0 lead with 7:58 remaining in the first quarter when Tommer connected with Kyle Zygmunt on the first of three TD throws.

Trinity took its only lead of the game early in the second quarter on an Ian Anderson touchdown pass to LeJon Woods. Anderson ran in the two-point conversion for an 8-7 advantage.

The Trojan lead was short-lived as Tommer threw another touchdown pass to Rory Corrigan that gave Independence a 14-8 lead with 6:40 left in the half.

Once again, Trinity responded. This time, Cale Moss ran for a score and Anderson hit Chrishaun Price on the two-point conversion to pull the Trojans to within 21-16 with eight minutes left in the game.

Pascarella hauled in a six-yard pass from Tommer to close out the scoring.

“It was exciting to contribute to the win,” Pascarella said. “Our team really stepped up in the fourth quarter. The first touchdown was set up by a great pick by Max Tarnowski and my line had a big push to get me in the end zone. The second one was set up by Rory and the line putting us in great position and Michael threw me a nice pass for the touchdown. After our loss against Columbia and the injuries we have dealt with, we have really come together as a team and are going to keep the momentum moving forward. We are excited for the rest of the season.”

Tommer completed 20-of-27 passes for 260 yards and three touchdowns. Corrigan ran 18 times for a career-high 166 yards and he also caught five passes for 96 yards and the touchdown. Zygmunt led the Blue Devils with nine catches for 74 yards.

“Michael stepped up and Kyle had a really good game with a lot of touches,” Adams said. “Rory was just phenomenal. Trinity did some good things. They have some athletes and did a good job of keeping us off balance a little bit.”

Independence racked up 428 yards of offense behind an offensive line missing two starters.

Ashton Lerz, who started the season as a tight end before moving the line, was forced to snap after the Blue Devils lost their regular center on Friday. Then, early in the first quarter, Independence lost tackle David Jedrzejek to injury.

“One of our Achilles heels is we’re not deep on the line,” Adams said. “We had to make some last-minute changes and Ashton snapped for the first time. The kids stepped up.”