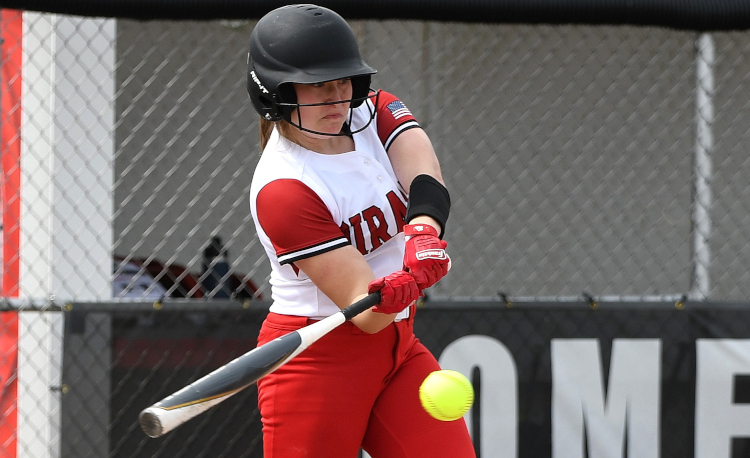 With a first-inning triple, Perry’s Elle Infalvi recorded the 100th hit of her career and sparked the Pirates to a title-clinching 15-1 win at Geneva on Monday.

Infalvi, who was 5-for-5, entered the game with 99 career hits. During the winter basketball season, she reached the 1,000-point milestone for her career, leaving her in very rare company.

“Scoring 1,000 points and having 100 hits is something I’m very proud of and being recognized as a multi-sport athlete is special to me,” Infalvi said. “I have worked for years to be the best softball and basketball player I could be and this year all of my hard work is paying off.”

The win was a big one for the Pirates for many reasons.

The Pirates, who improved to 9-6 overall and 6-0 in league play, also bounced back after losing three straight games at the Prebis Memorial Tournament over the weekend.

“Since yesterday, I have been wondering how the girls would respond after playing three really nice teams at Prebis where we struggled, but all things that are easily fixed,” said Perry coach Joe Medlen. “Today, we tweaked some things on defense and the team responded. I’m very happy with how the lineup battled 1-9. We’re having a ton of strikeouts looking down there and have to just work on putting balls in play and they did today.”

Faith Hartman drew a walk to lead off the Perry first and Infalvi tripled to score Mia Ward, who pinch ran for Hartman.

That 1-0 lead held up until the third when Perry struck for two more.

Infalvi led off with a single and moved to second on a passed ball. Lilly Agostine then hit a two-out RBI single to make it 2-0 and she scored on Gigi Vicini’s triple.

Geneva’s Daliz Alvarez and Kayli Stash both singled in the bottom half of the inning and Alvarez scored on an error to cut Perry’s lead to 6-1.

The Pirates slammed the door on the Eagles with a nine-run seventh.

Vicini started the rally with a leadoff single and Rileigh Liddy reached on an error with one down. Emma Webb, Hartman, and Infalvi then hit back-to-back-to-back singles and Moon drew a walk. Infalvi, Agostine, and Vicini all hit singles before Calli Thompson pushed across another run on a groundout to make it 15-1.

Infalvi led the Pirates with five hits. Vicini finished with three and Hartman and Agostine both recorded two for Perry.

“Elle led the girls today and they responded,” Medlen said. “Sydney Moon talked to the girls after last game and they responded today. That is what seniors can do for a team. I sometimes forget we’re a very young team. Every game that we have adversity it will only make us stronger. This team cares about each other more than I ever have seen in the years I have been at Perry. Again, senior leadership has paved the way.”

Clinching a share of a fifth CVC title added an exclamation point to Infalvi’s big night.

“It’s very exciting to win another CVC championship and personally clinch my fourth,” she said. “I am thankful to be a part of such a successful program with such amazing coaches. It’s exciting to get my 100th hit tonight. It shows hard work pays off and is one goal I had to the season.”

Alvarez was 2-for-2 for Geneva.