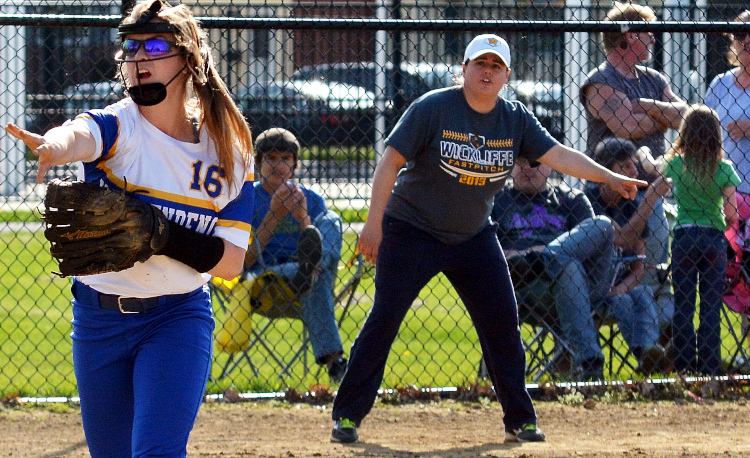 The Blue Devils scored early and often to claim their seventh win of the season.

More importantly, the victory was the 100th of Mucciarone’s coaching career.

“You don’t really think about it until it happens,” Mucciarone said. “I saw at the end of the 2019 season when I was doing the stats that I had 93 wins and only needed seven more to make 100. Last season got canceled, so this season when it came around I thought about it again, but totally forgot about it until the West Geauga game.”

The Blue Devils beat Kirtland on Monday, April 19, setting up a big game with West Geauga the following day.

Not only would a win have led Mucciarone to the milestone victory, but it would have left Wickliffe in first place of the Chagrin Valley Conference Valley Division.

West Geauga had other ideas and beat the Blue Devils, 15-5.

While Mucciarone may have temporarily lost track of her win total following that setback, her players didn’t and went out and beat the Longhorns in five innings.

“It’s just one of those things that you check off your list and keep on moving on,” Mucciarone said. “It’s a nice milestone to hit and to know I’ve been influencing the program and helping the girls have successful seasons since I started coaching in 2014.”

Through 147 games, Mucciarone has coached the Blue Devils to a 101-46 record.

Her best season came in 2017 when the Blue Devils finished 20-3 with three one-run losses. Wickliffe lost to Perry twice during the regular season and lost to Conneaut, in a 1-0 extra-inning affair.

“That was a great season,” Mucciarone said. “I can only go back so far with stats, but I believe that was the winningest program in Wickliffe history.”

Mucciarone’s teams have finished above .500 in seven of eight seasons with five seasons with 14 or more wins.

While she hopes to one day lead the Blue Devils to a district, regional, or even a state title, she remains focused on helping each of her players reach their own potential.

“That’s really all I hope for every year,” she said. “I’m proud of the girls for buying into the program and it’s reassuring to know that what I’m doing is working because we’re seeing progress and success every year. It’s always a roller-coaster ride. You’re never going to have undefeated seasons, but seeing the girls from the first time day that they come in in February to the end of the season, I see improvement every year in all the girls, whether they’re freshmen or seniors.”

Mucciarone credits much of her program’s success to playing in a competitive conference and against quality non-conference opponents.

“I think it inspires us a lot to know that we’re surrounded in this Northeast Ohio area with a lot of really good softball teams and the teams we play, we push them and they push us,” she said. “I tell the girls, you can’t expect any team to fall over and let us walk all over them. They’re going to give you good competition and that only helps, not only us but all the other teams around here. Being in the conference and area of Ohio that we are, it’s very productive for the development of teams and players.”