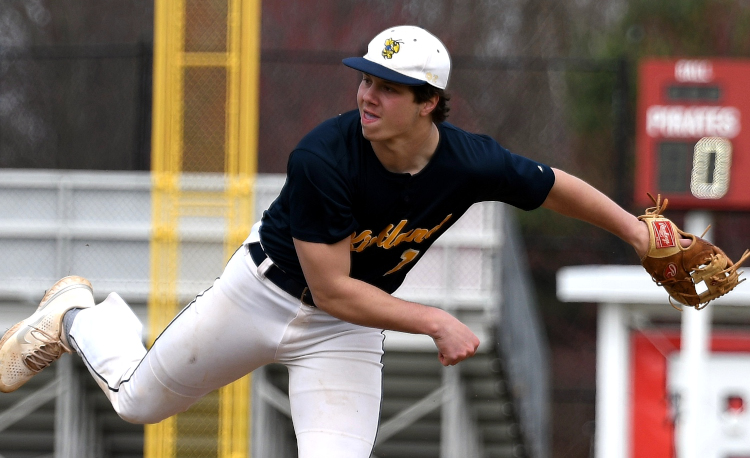 Kirtland senior Mason Sullivan set a new school record in the Hornets’ 12-2 win at Harvey on Monday and it had nothing to do with his complete-game pitching victory.

His fifth-inning triple was the fifth of his season leaving him as the school’s all-time leader with five three-baggers in a season. He was tied with Joey Torok with four triples.

Sullivan also limited the Red Raiders to two runs on five hits and he struck out five.

“Mason was very efficient today,” said Kirtland coach Luke Smrdel. “He had great command and got ahead of batters.”

It didn’t hurt that by the time he threw his first pitch, his teammates had built a 7-0 lead in the top of the first inning.

“We are starting to realize the importance of getting a lead early in games,” Smrdel said. “We constantly talk about winning every inning, and in conference games, it’s critical to get the momentum on our side as early as possible. Today, we were able to do that and we got the job done on the road.”

Mac Boyd was hit by a pitch with one out to start the seven-run rally. Pierce Boyd then singled with two outs and Danny Davidson hit a two-run double. Gage Sullivan and Anthony DeMarco followed with back-to-back singles and Adam Knaak drew a walk. Tommy Gogolin reached on an error and Reese VanArnhem singled to close out the inning.

Sullivan took it from there.

“It helped me a lot on the mound,” he said of the seven-run lead. “I didn’t feel a lot of pressure on me. All I had to do was throw strikes and let the defense do the work. Even with a big lead, I still had to stay focused, but knowing I had a big lead, I was able to pitch stress-free.”

Sullivan and Davidson both drew walks in the second and Gage Sullivan tripled them home for a 9-0 lead.

A leadoff walk and a two-out double by Connor Bates got the Red Raiders on the board in the third.

Kirtland added three runs on the fifth, two on Mason Sullivan’s triple, and another on Pierce Boyd’s groundout.

Harvey’s Jaden Debevec tripled to lead off the bottom of the fifth but was thrown out at the plate when Blake Brozik reached on a fielder’s choice. Avery Anderson’s two-out double pulled Harvey to within 12-2 but the Red Raiders couldn’t push across another run to avoid the run rule.

Sullivan threw first-pitch strikes to 12 of 23 batters faced and didn’t allow two hits in an inning until the fifth.

“The fastball was getting over the plate, which helped me set up with my curveball,” he said. “Getting that first-pitch strike allows me to play with the hitter a little bit, like throwing my off-speed for a ball hoping they’d swing.”

Gage Sullivan led Kirtland at the plate. He finished the game 2-for-3 with two RBI. Seven other Hornets collected a hit in the game.

Bates was 2-for-3 for the Red Raiders.