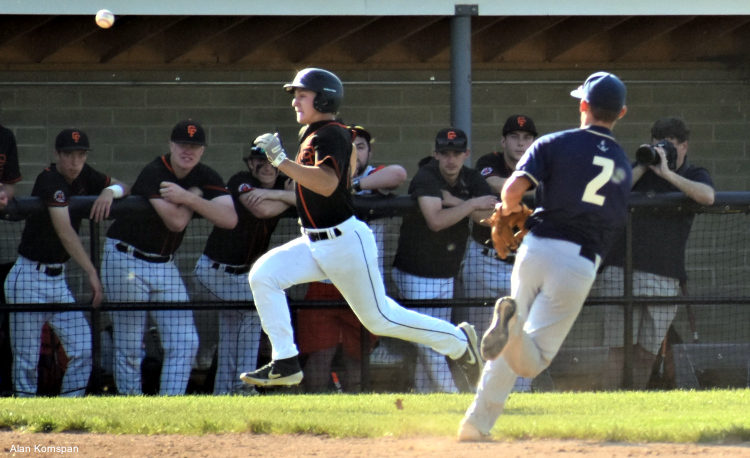 CANTON—Chagrin Falls stranded 10 runners, including seven in scoring position, as the Tigers fell to Archbishop Hoban in a Division II regional semifinal on Friday, 4-2.

The Tigers loaded the bases in both the first and fifth innings and left two on in the third and seventh.

“The kids were awesome today,” said Chagrin Falls coach Mike Sweeney. “We were trapped on the bases all day. We just couldn’t get the big hit today.”

Chagrin Falls scored a run in the top of the first when Mike Amendola was hit by a pitch, Charlie Greenlief drew a walk and Dawson Pierce singled to load the bases. Jack McMullen then took one for the team as he was hit by a pitch to give the Tigers a 1-0 lead. Three straight strikeouts ended the threat.

A walk, a hit batsman, and a single gave the Knights a 2-1 lead after two and three singles pushed the Hoban lead to 4-1 in the fourth.

Amendola drew a walk to start the Chagrin fifth. Greenlief then singled and Pierce walked to load the bases for the second time with no outs but the Tigers managed just one after a Hoban pitching change.

Hoban freshman Noah LaFine, a Vanderbilt University commitment, walked the first batter he faced to cut the Knight lead to 4-2, but a strikeout and a groundout ended the inning.

“It was a grind for sure today,” said Hoban coach Andrew Bonnette. “These are the kind of games where one ball bounces one way; you never really know what’s going to happen. Hats off to Chagrin; that is a quality baseball team. They kept it tough for us all day.”

The Tigers had one last chance to keep their season alive when Greenlief reached on an error to start the seventh and Pierce walked. McMullen’s groundout put the tying run in scoring position but LaFine pitched out the jam to seal Hoban’s win.

Greenlief and Pierce each were responsible for one of Chagrin Falls’ two hits in the game. Pierce walked three times in the game.

The Tigers closed out the season with a 24-7 record.

Alan Kornspan contributed to this story