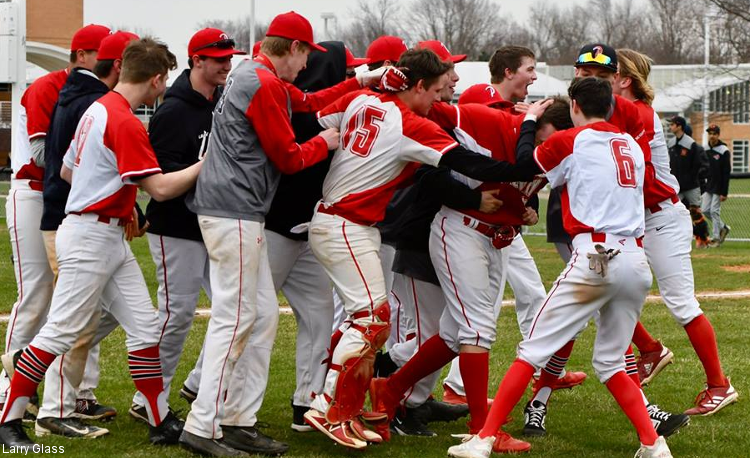 Spencer Kane pitched a complete game and Kyle Davanaugh delivered a game-winning RBI single in the bottom of the seventh inning to lead Perry to a 2-1 win over visiting Orange on Thursday.

With the victory, the Pirates extended their winning streak to five games and improved to 6-2 overall and 3-2 in the Chagrin Valley Conference Chagrin Division.

“That was probably in the top three of my best moments in baseball,” Perry coach John Grdina said. “It was like we won the World Series. They ran out to the field and Davanaugh threw his helmet like 50-feet in the air. They were just pumped. They went from freezing their butts off to feeling like they won the World Series.”

Before the game, Grdina threw on-field batting practice to the Pirates and felt the gusting wind whipping around the infield.

He warned his players of the impact the weather could have on the game and they should be ready to step up when called upon.

“I was looking at the wind and it was just whipping in and it got colder,” Grdina said. “I went over to the dugout and I said this is going to be a low-scoring, one-run game and whoever makes the first mistake is going to lose.”

Kane and Orange’s Max Leikin were locked in a 0-0 pitcher’s duel for the first five innings.

Orange had managed just two hits and put another runner on base via a Perry error and the Pirates had collected just two hits, one walk and had a runner reach on an error.

Caleb Theis opened the Orange sixth by reaching base and moving to second on an error. He scored on Ty Van De Motter’s two-out single.

The Pirates responded in the bottom half of the inning with a two-out run of their own.

Eric Pentek was hit by a pitch and moved to second on Matteo Koppel’s single. Grdina then subbed in Noah Smith to run for Pentek and Nathan Smith singled him home to tie the score at 1-1.

A one-out walk and a single put Lions on first and second base in the top of the seventh.

Kane stepped off the rubber and looked toward first base, which prompted the Orange runner at second to break for third. Kane threw over to Koppel at third for the putout.

“We were trying to do a pickoff play at first and the guy on second base just sprinted to third and we threw him out there,” Grdina said. “It was a really close play at third.”

A strikeout ended the Lions threat and set up Perry’s dramatic finish.

Josh Adams led off the frame with a pinch-hit single then was replaced on base by Connor Konrad, who was thrown out at second by Orange catcher Jack Newman on a sacrifice bunt attempt.

Sam Bellissimo, who reached on the fielder’s choice, was then thrown out trying to steal second.

“Our first guy got on and we do a bunt to move him into scoring position but the catcher throws down to second and bang-bang, throws him out,” Grdina said. “We did a fake bunt and tried to steal and they called him out so now we have nobody on and two outs.”

David Stewart then hit a ball to the Orange shortstop, whose bobble left just enough time for Stewart to beat the throw to first.

Kane then singled to put runners at first and second and Davanaugh punched the second pitch he saw through the middle to end the game.

“I told the guys if we can just get back to the basics of winning a baseball game, just throw strikes, don’t give up any free bases, play solid defense and have timely hitting that we have a chance to win every game,” Grdina said. “We’re throwing strikes, we’re playing decent defense and we’re putting the ball in play. We only struck out twice today.”

Kane allowed the one unearned run on four hits and struck out three and also finished 2-for-4 at the plate.

Nathan Smith finished 2-for-3 with an RBI and Davanaugh was 1-for-4 with the game-winning RBI.

After their slow start, the Pirates are emphasizing the importance of each game and each pitch and so far that strategy has paid off.

“Every game now is a playoff game,” Grdina said. “We’re very fortunate to where we have four starting pitchers, so I’m trying to do it like the (big leagues). Everyone gets his day. Spencer threw 75 or 76 pitches and has now thrown back-to-back or maybe three games in a row complete games.”