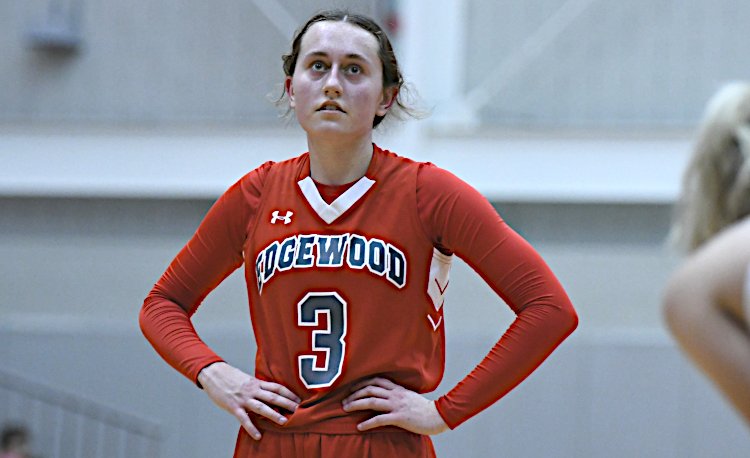 Edgewood junior Kaci Kanicki morphed into a dragonslayer over the past two games as she scored 30 or more points in back-to-back wins over league rival Lakeside.

“It’s super exciting to be able to play well along with my other teammates, and I couldn’t do it without them,” Kanicki said. “Our other guards, McKenna Vencill and Katie McCollister always look to me and help me get open looks, which is a great thing. The whole team has been playing amazing and helping the team just as much in getting these wins.”

In addition to posting game-high point totals, Kanicki has been contributing in other ways as well. On Monday, she recorded a double-double with 30 points and 14 rebounds and also added four assists, two steals, three deflections, and a blocked shot, and drained four 3-pointers.

“I was shooting decent from (beyond the arc), and I scored off of some steals, which always helps to get the momentum going for us,” she said. “Once one person gets an easy bucket it’s a total boost to everyone’s confidence and energy. I also tried to get to the hoop more when the defense broke down.”

Vencill also scored in double figures for the Warriors with 15 points and Johanna Annick and McCollister both contributed with eight. Taylor Visnosky pitched in with four points, Avery Vencill scored three, and Tori Skaruppa and Isabelle Stern both finished with two points in the win.

With the win, the Warriors extended their winning streak to four straight games.

“I feel the girls have finally got some momentum and are starting to believe that we can compete in every game,” said Edgewood coach Randy Vencill. “All their hard work is paying off at the right time.”

After beginning the season 0-5 and then 2-9, the Warriors have played their way into a situation where they can close out the regular season with a winning record.

To do that, they’ll have to win their four remaining games or three of four along with at least one postseason win.

“I think the big thing for our team is maintaining confidence and believing we can win,” Kanicki said. “We also keep each other in check and try to keep each other’s heads up. Overall, we have just been playing tougher and harder defense, which is something that is going to be crucial heading towards the end of the regular season. Also, getting everyone their looks, and trying to share the ball in order to get the shots we need to win. Johanna Annick has been done great rebounding and fighting for her points in the paint as well, and having her get looks is important as well.”