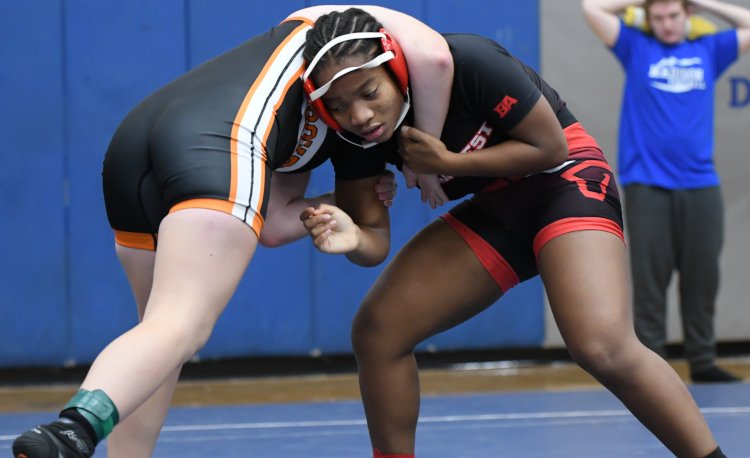 Lutheran West’s girls’ wrestling team has had a lot of firsts in its short history and on Saturday, they claimed another by winning the Columbia tournament.

The Longhorns finished with 107 points while Alliance was second with 90.

“That was pretty awesome,” said Lutheran West coach Dave Ressler, one of the driving forces behind girls’ wrestling being sanctioned in Ohio. “We brought seven girls and placed all seven, so that was pretty good. We were down three girls, two had season-ending injuries, so we could have had three more place winners but it was good to finally get that tournament championship. We have finished second and fourth and fifth a bunch of times this year. We just couldn’t get that elusive victory, so that was pretty cool.”

Kerr went 4-0 with three pins during the pool portion of the tournament and then suffered a disappointing loss to Keystone’s Lydia Gould in the championship bout.

“Catie wrestled well except for the last 30 seconds of her championship match,” Ressler said. “She was up and winning that match but got reversed and pinned. I wish she would have gotten that championship because she has been second a bunch of times, but she scores a lot of points for us. She’s got 26 wins on the year already.”

Reyes was 2-1 with a pin and Willis went 4-1 with four pins. Her only loss was to tournament champion Bailey Hackett of Brookfield, who placed fourth at the state tournament last winter.

“Paris wrestled really well for us,” Ressler said. “Jaeyla has been solid for us all year. She’s a senior and has wrestled all four years. She was on that original team so it was pretty special for her to see that the team could get a championship.”

Lutheran West travels to the Mentor duals on Saturday.