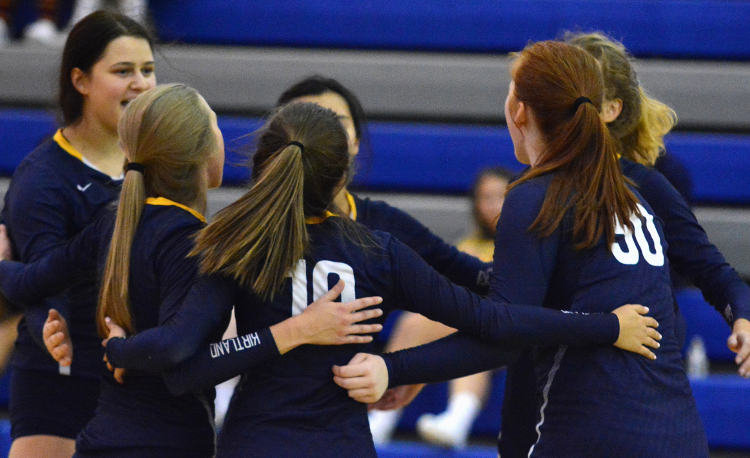 The Hornets were 0-11 against the Badgers since the 2012 season until they scored a 3-0 upset at Berkshire on Oct. 9, 2018. Kirtland extended its winning streak to two straight in Burton with Tuesday’s 3-0 victory over the Badgers.

“It’s extremely exciting for our program,” first-year Kirtland coach Arlayna Newcomer said. “Our girls put in a lot of hard work and I’m glad we are seeing it pay off. We keep getting better every game. We had a game plan and executed it to a ‘T.’”

The Hornets also extended their set winning streak to nine. They last lost a set—and a match—on Aug. 22 in a 3-2 loss to host Grand Valley.

With the win at Berkshire, Kirtland improved to 5-1 overall and 2-1 in league play.

Natalie Glowe led the Hornets with 12 kills while Stella DeJohn and Abby Ruckel each finished with four.

“All of the girls played great tonight,” Newcomer said. “Our defense, block included, really made an impact on tonight’s match.”

Ruckel is one of the few players on the Kirtland roster to experience the lack of success against Berkshire.

“As a senior this year, I was able to recall our varsity win last year over Berkshire in three, but I also had to realize that many of our girls are coming in blind because they didn’t really know of some of the struggles we have faced with Berkshire,” Ruckel said. “I think it was a positive for our team to not know what to expect until we see them on the court.”

Ruckel credited her team’s focus for coming out on top.

“We have been really trying to do our job on our side of the court; that’s is our main goal,” she said. “If we clean up our side, we play better and with more confidence. That was the main factor of our win tonight; everyone on our side doing their job and us putting all the parts of the game together.”

Kirtland’s success early this season follows the trend dating back to Oct. 2, 2018 when they closed out the regular season with six straight wins.

The Hornets have won 11 of their last 12 regular-season contests.

“We know we still have a lot to work on, but this really does boost our confidence,” Ruckel said. “Every game, win or lose, our team is learning and gaining experience on the court, which is really beneficial. We are excited for Cardinal (on Thursday) and hopefully we can keep this momentum going.”