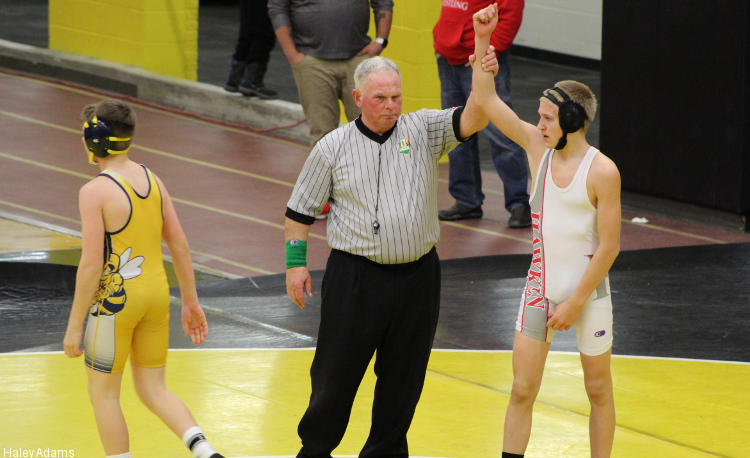 BEACHWOOD—Kirtland and Hawken both turned in strong performances at the Beachwood wrestling quadrangular on Friday.

The Hornets finished the night 2-0 overall while the Hawks were 1-1 but won 11 of 12 individual matches wrestled.

“Overall, the guys were more aggressive out there,” Kirtland coach Scott Francis said. “When you’ve got young guys, they can be a little bit timid and afraid to hit moves because they’re worried if they’re going to work or not. We just stress to them just to hit them anyways. Eventually, they come around. This was a big improvement for a lot of our younger guys.”

Aidan Marsh, Brayden Adkins, Brennon Braud and Kory Dages all went 2-0 for the Hornets. Marsh pinned both of his opponents while Adkins and Dages each recorded one fall on the night.

“Aidan stepped up,” Francis said. “He’s a sophomore and he’s one of the ones that has some nice moves. He’s just afraid if they’re going to work or not. We just stay on him to go in there and hit them and he’s starting to do it and it’s starting to pay off for him.”

“At heavyweight against Hawken, Jeff Kusar lost 4-1 but we were happy in that match because that was a real good kid. That could potentially be a go-to (state) match at districts but we’re going to see him at the CVC (tournament) and we’ll see him at sectionals. He’ll see him a few more times so that was a good one to see early in the season. Konnor Duncan had a good match against Reineke. He lost but it was a close match. Those are two kids with state potential.”

Hawken went 5-1 in matches wrestled against Kirtland but the Hawks couldn’t overcome the holes in their lineups and fell to the Hornets.

They salvaged the night with a 33-30 win over Chagrin Falls by winning all six matches wrestled against the Tigers.

“We only have seven guys so we all have to get wins if we’re going to have a chance,” Hawken coach Bob Rodriguez said. “We pretty much did that.”

Hlifka pinned both of his opponents.

“Jackson Reineke had a nice match against a returning state qualifier, as he is, against Kirtland. That was a real close match,” Rodriguez said. “William Lindsey had a nice day too.”

The Bison fell to Kirtland but beat Chagrin Falls, 42-24.

“The biggest thing is you want the kids to compete hard,” Beachwood coach Jimmy Greenwood said. “The work we do in the practice room, it definitely showed tonight. It also showed we have some things we need to work on but overall, at this point in the season, it’s really about sharpening the small things, making minor adjustments.”

The Bison finished 8-7 in matches wrestled.

Zach Kudroff, Paul Jacobs, Michael Schmidt and Elijah Durham-Harris all finished 2-0 for the Bison. Durham-Harris pinned both of his opponents while the others each recorded one fall.

“Elijah Durham-Harris went 2-0. He went up a weight class from 195 to 220 and still got the job done tonight by fall was good,” Greenwood said. “Paul Jacobs went out and wrestled really hard to get two big strong wins. He won against a kid who beat him last year. Michael Schmidt also got two strong wins tonight. Zach Kudroff, my 120-pound senior, the kid wasn’t even sure if he was going to wrestle this year and then he goes out and lights up the scoreboard and looked real good. All the kids competed real tough. I was really proud of the team.”

Eisa Texiera lost his only bout of the night but he preserved a team point by not being pinned by Kirtland’s returning state qualifier, Konnor Duncan.

“It’s hard to be happy with a loss, but I had a freshman go out against a senior and he fought as hard as he could not to get pinned and he didn’t get pinned,” Greenwood said. “As much as you want to see the kids go out and be successful, you’ve got to take small victories like that. He’s doing a good job. That’s probably the toughest kid he has wrestled this year.”

Chagrin Falls finished the night 0-2 but head coach Peter Cimoroni saw a lot of improvement out of the Tigers.

“What I really liked to see was their fight, their improvement, their dedication and their tenacity,” Cimoroni said. “We’re young but we’re learning and we’re listening. The most important thing is they understand and start to put the process in place and that’s what they’re doing.”

Trenton Kruse and Owen McClintock both went 2-0 for the Tigers with a forfeit and a pin to their credit. Jonathan Mares also recorded a pin.