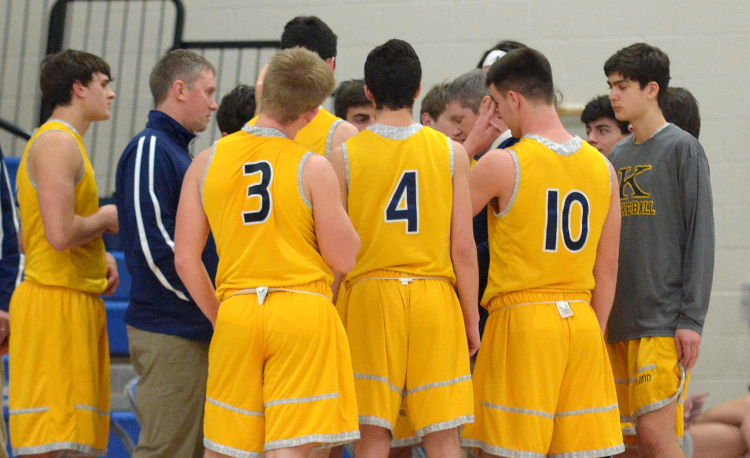 Four players scored in double figures to lead Kirtland to a 65-59 nonconference win at Geneva on Tuesday.

The Hornets, who bounced back after a loss to West Geauga over the weekend, opened the fourth quarter on an 8-1 run to keep the Eagles from mounting a comeback.

“It’s always good to get back on the floor after a tough loss,” Kirtland coach Shawn McGregor said. “That fourth quarter start was huge for us to get a little breathing room.”

The Hornets and Eagles played even in third, which allowed Kirtland to maintain a 55-48 lead heading into the fourth.

Geneva had pulled to within 50-47 but Joey Mongelluzzi added a basket and Julian Davis hit a 3-pointer late in the third to extend the lead.

T.J. Green, who led the Hornets with 13 points, opened the fourth with a basket followed by a free throw and Grazia added a 3-pointer to push the Kirtland lead to 61-49.

“We did a nice job of moving the ball, finding the open man and making plays,” McGregor said. “Our bench was fantastic tonight, allowing us to keep pressure on them throughout the game, which was big heading into the fourth quarter.”

“Our team tonight was getting open looks and continued to cut to the hoop. We also used fast breaks to our advantage and finished a lot of tough shots,” Green said. “Luckily, my teammates are all unselfish and are willing to give me the ball whenever I am open. Every person on the team continues to finish the open looks and this helps us capitalize on points.”

Kirtland closed out the regular season with a 16-6 record.

Bouncing back from Friday’s loss to West Geauga gave the team the momentum it needed to start the postseason against Cardinal on Feb. 25.

“The win was huge for us because we got our heads down a little after a close West G loss,” Green said. “This win gives us a lot of confidence going into what is going to be a tough postseason. We played well against a real tough team, which helps us come together and prepare for the postseason.”

Brandon Smith led the Eagles with a game-high 23 points and Blake Peet and Vinny Varckette also scored in double figures with 12 and 10, respectively.

Geneva closes out the regular season at Jefferson on Friday.