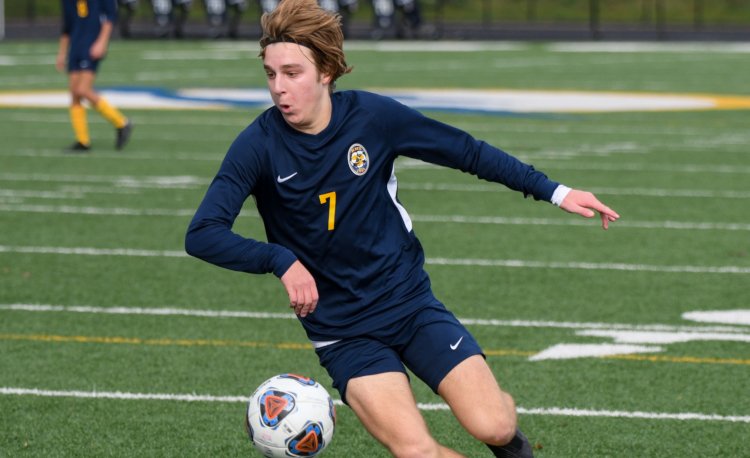 STREETSBORO—Kirtland senior Marco Valentic scored a goal and added a pair of assists in the Hornets’ 5-0 win over Andrews-Osborne in a Division III regional semifinal at Rocket Stadium on Wednesday.

Valentic now has scored 35 goals with 31 assists this season.

“That’s encouraging,” said Kirtland head coach John Valentic of his son’s 30-30 accomplishment. “I’m really proud of the assists and his ability and desire to pass. I’m never going to turn down a goal, we need goals, but for me as a coach, I value that person who is looking to pass. I’m really happy for him and obviously for the team that he’s got so many assists and goals.”

The Hornets, who improved to 18-2-1 with their second win over Andrews this season, struck first on a counterattack that saw Jason de Zwaan use a reverse header at midfield to send the ball up to Evan Dures, who sprinted past a pair of defenders and then slotted the ball into the lower right corner from 25 yards out with 26:59 left in the first half.

The Hornets caught a break in the final seconds of the first half when Valentic’s corner kick rattled off one Andrews defender and then hit another before ricocheting into the net for an own goal with seven seconds left in the half.

“That was huge for us,” Coach Valentic said. “If it was 2-0 at halftime, that’s great, but that third one right at the end, I think that really discouraged them and it really buoyed us and let us take a breath. It was just a matter of seeing the game out from there. We kind of took the foot off the pedal a little in the second half but we still controlled the game. I think they may have gotten off one shot so I was pleased with the defensive effort as well.”

Dures recorded his second goal of the game off of a Valentic assist with 14:08 remaining and Peter Vukovic created an instant highlight when he cut through the night air to head in a Valentic corner kick with 8:14 left in the game.

Kirtland improved to 3-2 in regional semifinal games. The Hornets first appeared in the regional tournament in 2016. They opened the regional with a 1-0 win over South Range and then fell to Kidron Central Christian, 2-0, in the regional final.

Two years later, in 2018, the Hornets beat Central Christian, 3-2, in the semifinals and then knocked off Campbell Memorial, 4-0, to win the regional title for the first time in school history. They fell to Archbold in the state semifinal, 3-0.

Kirtland will play Crestview on Saturday for the regional title at Howland High School. Kickoff will be at 2:00 p.m., shortly after the Hornets’ girls’ team plays Chippewa for the regional crown.

“I’m definitely happy with the victory and more importantly, how we played,” Coach Valentic said. “We’re still working toward maintaining our identity and being true to ourselves. Andrews was a good test for us because they really came out and pressed us and they were physical and aggressive. I thought we handled it well and hopefully, that will continue into the next round.”

Crestview will enter Saturday’s regional championship with a 10-4-4 record. Aside from that, the Hornets don’t know much about the Rebels.

“I’m going to do some homework and look at their scores and what coaches I can call and see if I can find some video,” Valentic said. “I’ve got two days to kind of come up with some info and we’ll see. It’s hard to try to do anything other than focus on what we do well and make sure we clean up some of our weaknesses or other areas of improvement. We’ll go from there.”