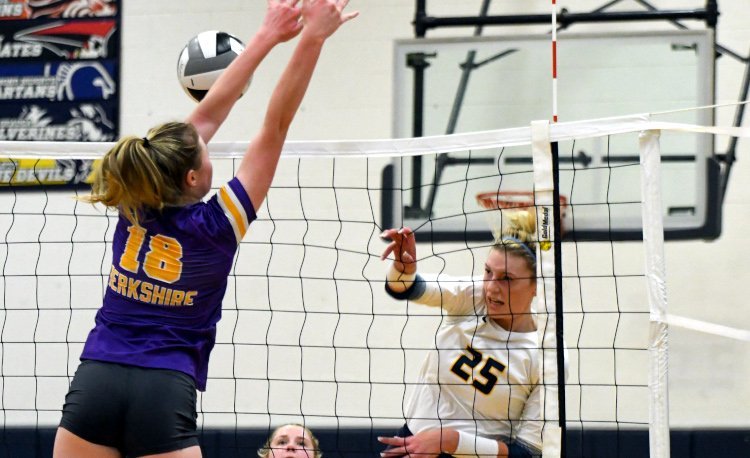 KIRTLAND—For the fourth straight season, the road to the Chagrin Valley Conference Valley Division title runs through Kirtland after the Hornets swept visiting Berkshire in a battle of unbeaten teams on Thursday.

“We really prepared for this game because we knew that Berkshire is a really tough team and they’re always pretty talented,” said Kirtland coach Arlayna Newcomer. “We’ve been keeping track of them and they’ve really stepped it up this year so we knew we couldn’t take this one lightly. The first couple of days of the week we’ve been in here really game-planning and drilling it down hard and I think it showed in our play tonight.”

Kirtland extended its conference winning streak to 21 straight matches and now has beaten Berkshire in eight straight matches dating back to the 2018 season. The Hornets swept the Badgers in seven of those last eight meetings.

But, Thursday’s match was different.

The Hornets collected their fifth straight sweep of the Badgers but it certainly didn’t come easily.

Kirtland jumped out to big leads in two of the three sets but the Badgers wouldn’t go away. Berkshire rallied from five-point deficits multiple times and always made the Hornets work for every point.

“Tonight was a tough game and quite honestly, they’re going to get tougher,” Newcomer said. “I think that’s what motivates them. We tried to make our schedule so that one, we can be challenged, and two, we can get better. I think the girls are excited for what’s to come and I think that’s motivating them. I think they know they’re capable of being successful at a really high level and that’s what keeps us going.”

Natalie Glowe led the Hornets with a game-high 19 kills and Marissa Carmosino added seven to help the Hornets control the net for most of the match.

“It’s awesome to have one really good hitter, but we’ve got a whole net full of great hitters,” Newcomer said. “When someone’s having an off night, someone else is having their best night and it’s someone else every game, and some games, it’s all of them. It’s really a beautiful thing to be able to see our offense come to fruition after a lot of work.”

“Having two setters gives us options,” Newcomer said. “They both work hard and they’ve got great attitudes. They want to win and be successful and they’re doing whatever it takes to do it.”

Ava Golem contributed to the win with 15 digs.

Berkshire gets its chance to avenge the loss on Oct. 4 when the Badgers host the Hornets.