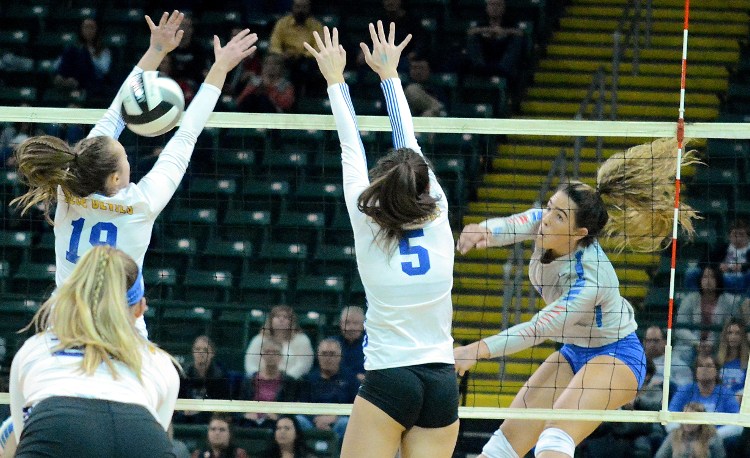 DAYTON—When it comes to winning state titles, the team that has the most players step up in the spotlight typically takes home the hardware.

In the case of Findlay Liberty-Benton, who defeated Independence in five sets to win the 2019 OHSAA Division III championship on Saturday, the Eagles didn’t have far to step thanks to a starting lineup that included two players who measured in at 6-foot-3 and two others at 5-11 and 6-foot.

“They’re bigger than us,” Independence coach Tony Messina said. “That matters in volleyball. We battled pretty hard. My hat’s off to the kids, they battled. I have no complaints about that. If there’s such a thing as a good loss, it’s a good loss.”

The Blue Devils, who closed out the year with a 24-5 record, weren’t intimidated by the taller Eagles and went on to win the first set, 25-18.

They trailed for most of the second before rallying to tie the match at 24-24 then fought off set point five times before finally falling, 30-28.

Independence regrouped and led in the third set by as many as five points on the way to a 23-21 lead. The Eagles scored the final four points of the set to take a 2-1 lead in the match.

“We were up in set three and gave the set back to them,” Messina said. “That was pretty big. They came back in set two and I figured they would. That was a great comeback by them to come back and take set three. They went up in set four and what I told the girl was it’s the type of team that when they get loose and when they get up on you they’re going to play freer and that’s dangerous, you guys have seen it enough. We were able to corral that in set four and come back and win set four.

The Blue Devils won the fourth set, 25-21, to force the decisive fifth game.

With the set tied at 3-3, the Eagles went on a five-point run and eventually led 10-4 before the Blue Devils rallied to within 12-9. That’s as close as they’d get as Liberty-Benton clinched its first state title with a 15-11 win.

“I felt pretty good about the tie-breaker but in a tie-breaker a four or five-point spread is hard,” Messina said.

The Eagles recorded 13 blocks in the match.

“We knew we were going to get blocked, we needed to get a little better on tempo,” Messina said. “The teams that succeed at state are the teams that control the ball. There (were) lapses of that today. Every time we lapsed at controlling the ball and could not pressure the ball over the net. That opened the door for them. You give a team like that free balls, easy balls, the ball is coming back at your head.”

Katie Taliaferro led the Blue Devils with a match-high 22 kills and a team-best four kills. Grace Smotek finished with 19 kills and 22 digs and Hanna Wilson added 16 kills and two blocks.

“They are so upset because this is their time here and they didn’t get it done,” Messina said. “They cannot have any regrets. You have regrets when you leave something on the table. Neither one of them left anything on that floor.”