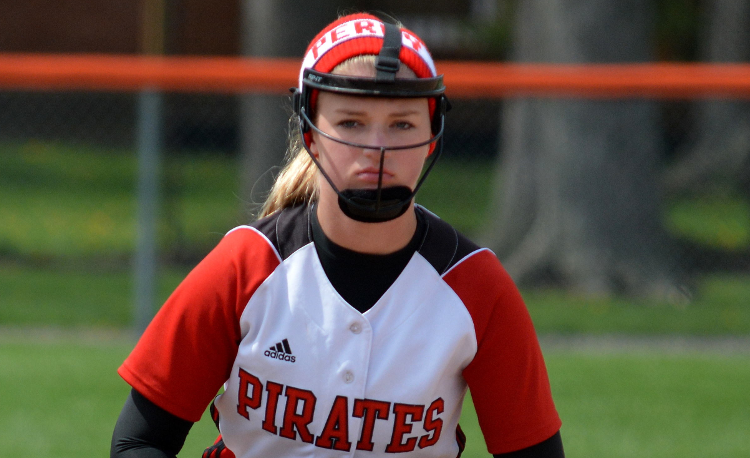 “Today was a true test due to the fact our ace, Olivia Moon, is out (with an injury),” Perry coach Joe Medlen said. “To get out of the gate with a win was huge for the girls. West G’s top five batters are some of the best hitters out there and are great kids. It was overall a great team effort and a very positive can-do attitude today. We coach to control the controllables and today we did just that.”

With Moon sidelined, the Pirates turned to two freshmen to face the vaunted Wolverines.

Faith Hartman started and went five innings to pick up the win. She allowed five earned runs on 12 hits and struck out three. Gigi Vicini threw two innings of relief. She didn’t allow a hit or a run and fanned one.

“They’re both full of potential and will surprise some teams,” Medlen said. “Faith is an excellent off-speed pitcher while Gianna brings a little more speed. Both Faith and Gianna have refreshing attitudes as both are always smiling and absolutely love the challenge. Both do whatever is best for the team and never bat an eye. I’m looking forward to these two doing big things in the future.”

West Geauga took a 1-0 lead in the top of the first but the Pirates responded with a run in the bottom half of the inning to tie it.

Perry added another in the bottom of the second but the Wolverines drew even at 2-2 in the top of the third.

The Pirates pulled away with a five-run third and added another in the fifth to take a 8-2 lead into the sixth.

“Experience is a blessing with this team as we they have been a part of a lot of tight games,” Medlen said. “We know we are prepared and never really panic. Sometimes we will press a little, but on any given day, anyone can win and we know every game we have a target on our back and accept it. Emalee Sines and Elena Ciolli made some big plays defensively that shut their momentum down. Senior leadership keeps us in the game.”

West Geauga added three runs in the top of the sixth but the Pirates responded with three of their own in the bottom half of the inning to close out the scoring.

Elle Infalvi led Perry at the plate as she finished the game 3-for-4 with a run scored and also knocked in a run.

“I only have a couple of kids I trust to make calls on their own when they’re up to bat and Elle is one of them,” Medlen said. “Elle reads the defense every pitch and takes what pitchers give her. Elle does what’s best for the team every at-bat from putting the ball in play to move runners, bunt, push bunt. She is a very tough out.”

Tara Gall and Mia Minello both finished with three hits for West Geauga. Gall and Bridget Sexton had doubles for the Wolverines.