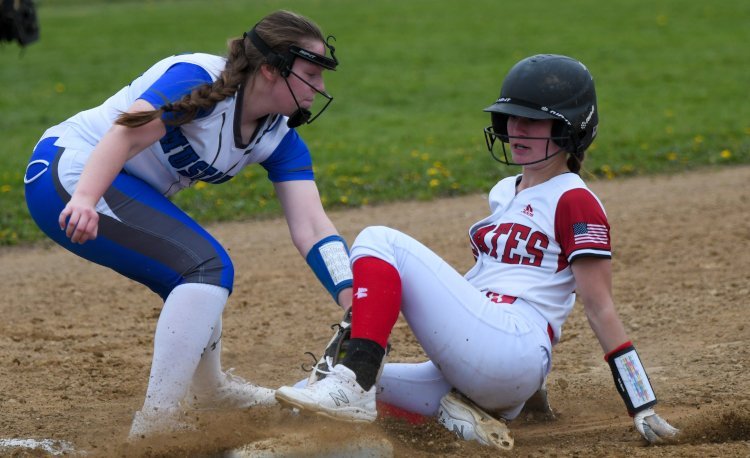 With the win, the Pirates improved to 15-7 overall and 8-0 in the Chagrin Valley Conference Lake Division. The win was Perry’s 77th straight in conference play.

“It means a lot to me,” said Perry senior Mia Ward of the streak. “I would never want to be the people to lose that record for us. We all have been working at it very hard for four years and it’s very exciting for all of us to keep it going.”

Perry pounded out 31 hits in the win.

“The girls are starting to come around and are hitting the ball very well over the last few games,” said Perry coach Joe Medlen. “The bottom of our order is too. Our No. 8 hitter, Sydney Collins, hit a bomb, so kudos to those girls because they worked their tails off. They work as hard as I’ve seen kids work so it’s not a surprise because I know how hard they work on hitting in the offseason.”

After scoring seven runs in the top of the first, Grand Valley responded with three runs in the bottom half of the inning.

Perry added another in the second but again the Mustangs responded. This time, they scored two runs in the bottom of the second to pull to within 8-5.

Perry led 11-5 heading into the bottom of the fifth but Grand Valley scored two more runs to stay within reach of the Pirates.

Perry scored two more in the sixth and then exploded for nine runs in the top of the seventh to seal their win.

Madeline Infalvi led the charge for the Pirates as she was 5-for-5 with a triple, four runs scored and a run batted in.

Collins was 3-for-5 with the home run, two runs scored, and a team-best four RBI.

Elise Strahan and Rileigh Liddy both recorded two hits and Faith Hartman and Mia Ward had one each.

Hartman started the game in the circle for the Pirates. She allowed five runs on eight hits with two strikeouts in two innings of work. Ward allowed two earned runs on seven hits and struck out three in three innings.

“Faith was doing well but for some reason, they were timing her up today and there’s nothing wrong with that, it happens,” Medlen said. “It was great to have two pitchers and Mia came in and pretty much shut it down.”

Emily Eland recorded three hits and three RBI for Grand Valley while Autumn Hostetler was 3-for-4 with two RBI. Courtney Hivick and Sophia Duffala both had two hits.