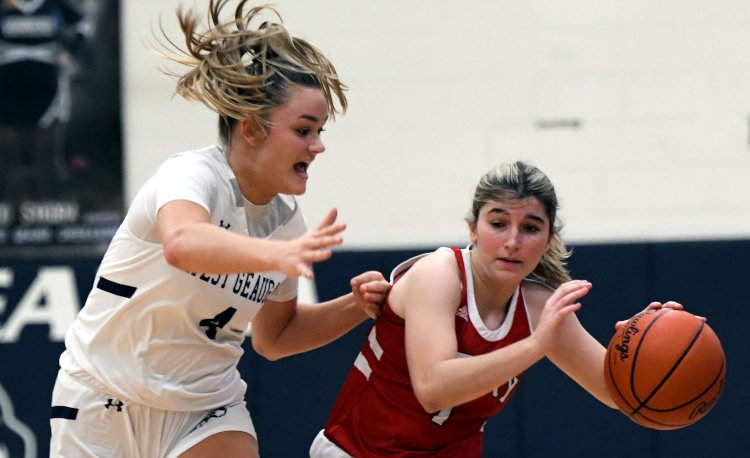 CHESTERLAND–A fast start and clutch finish led Perry to a 55-42 win over host West Geauga on Friday in a battle of Chagrin Valley Conference powerhouse teams.

The Pirates, who improved to 10-3, jumped out to an early double-digit lead and then held off the Wolverines in the second half with clutch shooting from the free throw line in the fourth quarter.

“It was really big,” said Perry coach Roy Infalvi. “We just got done telling our girls I thought we got out there, we fought and clawed and scrapped the whole game. I thought we played four really, really tough quarters. I thought we did a good job of rebounding, getting 50-50 balls, doing those little things, making foul shots, and protecting the ball at the end. I’m really proud of our effort tonight. It was a really big win against a great team, so I’m happy.”

Grace McKoon scored five of her game-high 21 in the first quarter and Sophia Makad and Audrey Austin hit 3-pointers in the first eight minutes to help the Pirates jump out to a 13-6 lead.

McKoon stayed hot into the second quarter with 10 more points to set the Pirates up with a 20-6 advantage before the Wolverines made a run to close the first half with Perry up 27-21.

Alexa Hocevar led West Geauga’s second-quarter run with nine of her 21 points in that stretch.

The Pirates limited Hocevar to just four free throws in the third quarter as the teams matched each other point-for-point to head into the fourth with Perry up, 35-29.

With both teams in the double bonus early, Perry delivered in the clutch.

The Pirates converted on 12-of-16 free throw tries in the fourth quarter and were 4-of-6 from the floor in the final eight minutes.

“We talked about being a little patient offensively,” Infalvi said. “I know at the end we were kind of holding the ball a little bit, but just being patient and making them work on defense, and when we did that, we got open shots, we got good looks, we got to the foul line, and they executed. Our girls did the job tonight. It’s all credit to them.”

McKoon led the Pirates with 21 points, Austin also scored in double figures with 12, Makad contributed with eight, Izzy McKoon and Rosalyn Tharp both scored four, and Abby Bartlett, Victoria Lynch, and Kaitlyn Newsome each finished with two points for the Pirates.

West Geauga’s early deficit proved too much to overcome.

“We struggled early on to score,” said West Geauga coach Brandon Stewart. “Both teams struggled early in that first quarter to score, and they went on a little bit of a run, and they started making shots. We really didn’t have an answer tonight. We tried to fight back, but we’ve been digging ourselves in some holes lately, and the more you try and play from behind, and the more you try to play catch up, you have to expend so much more energy. Perry is a disciplined team with a lot of seniors, and they shot the ball really well.”

West Geauga dropped to 9-3 on the year.