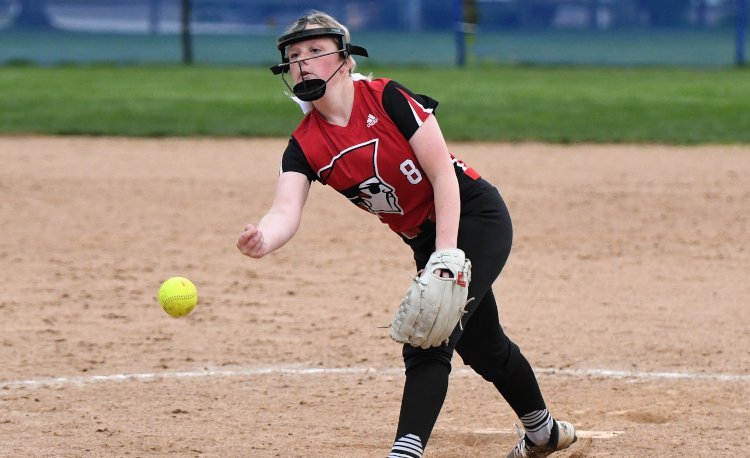 A 14-2 loss to Chardon on April 13 didn’t sit well with the Perry Pirates, who have since won three straight games by run rule.

“After that Chardon game, that was a little bit of humble pie, but they’ve been locked in since that game,” said Perry coach Joe Medlen. “We’ve been a totally different team. I’d love to play Chardon again because that day we were as flat as flat could be. We’re starting to really hit the ball and we’re starting out fast.”

Faith Hartman set the Mustangs down in order in the first inning and the Pirates went to work after that.

Madeline Infalvi, who finished the game 4-for-4, doubled and stole third inning to start the bottom of the first. She scored on Elise Strahan’s ground out.

“We did only score one run, but our goal is to win the inning and we did that,” Medlen said.

The Pirates added seven runs in the bottom of the second.

Two errors and an Infalvi single led to another Perry run in the third.

Perry added five runs in the fourth, all coming with two outs.

Grand Valley scored three runs on four hits in the fifth but it wasn’t enough to avoid the run rule.

Infalvi finished the day perfect at the plate and she scored three runs and knocked in four runs.

“It’s so exciting to be able to get the offense going,” Infalvi said. “As a leadoff, it’s my job to get the bats going early in the game.”

Over the course of Perry’s three-game winning streak, Infalvi is 10-for-11 at the plate with a double, nine runs scored, and five RBI.

“My teammates are so welcoming and supportive of each other, so it made me comfortable coming into high school,” Infalvi said of how she has settled in as a freshman. “Coach Joe believes in me and really worked with me this offseason to help me be prepared.”

On the season, Infalvi is batting .643 (27-for-42) with 22 runs scored and 10 RBI and has at least one hit in every game the Pirates have played this season.

While it will be difficult to maintain that hot streak, Infalvi is locked in on every pitch.

“I must take the approach of one at-bat at a time and adjust my approach based on the pitcher and defense we are facing,” she said.

Thompson finished the game 2-for-4 with four RBI and Strahan, Vicini, Agostine, Tharp, Hartman, Collins, and Hodge all finished with one hit for the Pirates, who improved to 7-5.

Hartman went the distance in the circle. She allowed three runs on seven hits and struck out four.

Emma Sullivan led the Mustangs with two hits and Karli Cunningham and Makayla Hopes both hit doubles. Emily Eland, Autumn Hostetler, and Courtney Hivick also had hits for the Mustangs.