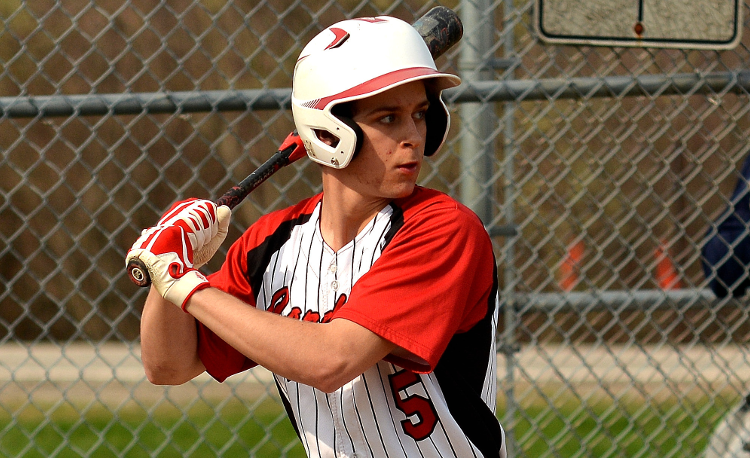 Justin Shank struck out nine and Kale Byler hit a three-run home run to lead Cardinal to a 4-1 win over visiting Liberty in a Division III sectional semifinal on Tuesday.

“He was on fire today,” Cardinal coach Seth Klepper said of Shank. “That was classic Shank. He had a little rough patch in the first inning. They kept blooping balls in and we couldn’t make a play on them. They were just falling in. After that first inning, he settled down and went to work.”

Liberty’s first two batters of the game reached on singles and a fielder’s choice gave the Leopards a 1-0 lead.

“I don’t think there was a single ball that was hit solid the whole afternoon,” Klepper said. “He kept hitting that outside corner and kept mixing it up with a curveball and his off-speed. He pitched another gem.”

Cardinal tied the game in the bottom of the first when Brice Hogue drew a leadoff walk and stole second. He scored on Jacob Gotham’s two-out single.

Brandon Collins was hit by a pitch and Dan Heredos drew a walk to set up Byler’s big hit in the fifth.

Byler hit the 3-2 pitch over the fence to close out the scoring.

“It was like one of those classic battles,” Klepper said. “It was 1-2 and then 2-2 and he just kept on fouling off pitches and then finally he just got into one. We had two outs and a full count and he put it out. Kale is a real quiet kid and you hardly ever know he’s there. I don’t think he stopped smiling the rest of the game. It was huge.”

Liberty put two runners on base in both the sixth and seventh innings but Shank pitched out of both jams to send the Huskies to Wednesday’s sectional final at top-seeded Warren Champion.

“It was a team effort,” Klepper said. “Everybody played well.”