Tigers rally for win over Revere 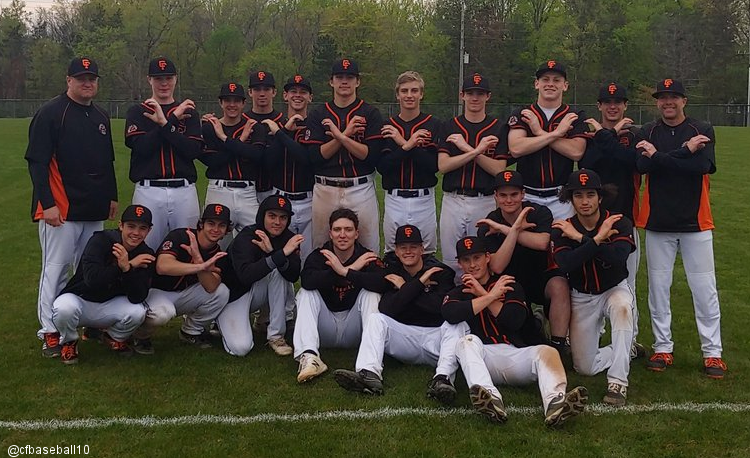 Chagrin Falls scored three runs in the bottom of the seventh inning to defeat visiting Revere, 5-4, in a Division II sectional championship game on Wednesday.

With the win, the second-seeded Tigers avoided an upset loss to the seventh-seeded Minutemen for the second straight season. Last spring, No. 8 Revere knocked off No. 1 Chagrin Falls, 6-3.

“Last year was last year,” Chagrin Falls coach Michael Sweeney said. “Now that we won, I think about how cool it is to avenge last year’s loss. However, at the time, that thought didn’t even enter my mind. I just wanted us to find a way to survive and advance. I just kept thinking how much baseball means to these seniors and how I wanted to get this one so that they can keep playing and I can keep coaching them. I love this group of kids. In general, it was pretty exciting, very fun and extremely nerve-wracking.”

Trailing 4-2 after 6 1/3 innings, the Tigers made the most of their final three outs.

Sam Dolan, Andrew Kirkpatrick and Dawson Pierce drew back-to-back-to-back walks to load the bases with nobody out. Max Faulds then doubled down the first base line to tie the game at 4-4.

“These kids never give up,” Sweeney said. “I think it helped by playing several close games last week. Being down 5-0 to Orange and coming back to win that game was something that helped us believe that we could do it. We also had an extra-innings win on Senior Day against Berkshire that gave us confidence that we could get it done. The bottom line is we have a special group of players who want to keep playing.”

Jack Amendola gave the Tigers an early 1-0 lead when he doubled and scored in the first inning. The Minutemen responded with a three-run second to take a 3-1 advantage.

It remained that way until the fifth when the Tigers scored a run when Faulds drew a bases-loaded walk.

“I was really happy for Max,” Sweeney said. “He had a tough week with some things that were going on so it was awesome to see him come up big in a big situation. He is such a great teammate and a great team player.”

Revere added an insurance run in the top of the seventh.

Amendola, Kirkpatrick and Kyle Zaluski each finished with two hits for the Tigers.

Dylan Scheetz picked up the pitching victory after throwing just 1/3 of an inning. He earned it after pitching out of a bases-loaded jam. With the win, Scheetz improved to 7-0 on the year.

Chagrin Falls improved to 21-5. The Tigers will play the winner of the Aurora-Woodridge sectional championship game in the Twinsburg District semifinals on May 20 at 2:00 p.m.