Shorthanded Blue Devils rise to challenge in win over Fairport 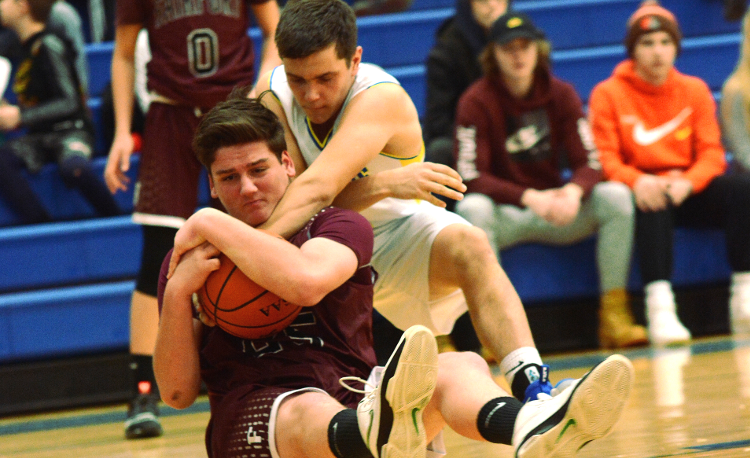 INDEPENDENCE—Down two starters, Independence was forced to alter its game plan and the Blue Devils responded with a convincing 75-48 win over visiting Fairport Harding on Tuesday.

The Blue Devils jumped out to a 25-16 first quarter lead and never let up in the Chagrin Valley Conference Valley Division showdown.

“I’m really happy that the guys accepted the challenge,” Independence coach Hugh McMahon said. “There were guys put into some different positions and we tweaked our game plan and put a few different things in. All the defenses we put in required them to play extremely hard and up-tempo and they did a great job with it. We made a few mistakes here and there but we didn’t make it the next time. That’s a sign of a team that’s really focused and got into it tonight.”

Four Blue Devils scored in double figures in the win.

Kyle Zygmunt led the way with 15 points, Matt Richards added 14 and Connor Blum and Wyatt Flynn each contributed with 11.

“They just decided to come out and play,” McMahon said. “That allowed them to ease into it and it was great. The guys stepped up. There is no reason when those other guys come back that we can’t keep the ball rolling with the same intensity.”

As the tallest player on the floor, Flynn was particularly effective.

In addition to his 11 points, he had a crowd-pleasing dunk, multiple blocks and created havoc under the basket for Fairport shooters.

“He’s feeling good,” McMahon said of Flynn. “He ran the floor extremely well. What I was impressed with was their game plan was, I’m sure, aimed toward him, as it was in our first game, so we moved him into some different positions. I was even more impressed that he got an offensive foul, that he was physical with it. He really has stepped up his game and took off from last year. At the beginning of the year, he was a little banged up and was thinking a little bit too much but he did a great job of being physical. He was the most dominant guy out there.”

The Skippers entered the game hoping to take advantage of the holes in Independence’s starting lineup.

Instead, the Skippers struggled to find their rhythm on offense during the early minutes and found themselves in an early hole.

“We knew that two of their three most important players were out with injury and everyone was saying before the game started that we’ve got a real opportunity if we come out the right way to jump on them,” Fairport coach Matt Cardina said. “Once it was time for the ball to be tipped off, I felt not all five guys were ready to do that.”

Whether it was an unforced error or Independence’s pressure defense, the Skippers turned the ball over five times in the first four minutes as the Blue Devils built an 18-3 lead.

“I think maybe they were a little shocked at some of the pressure Independence gave and Independence went a little harder than us in the beginning and it doesn’t take much of a difference of effort from one team to the next to blow it up in the first quarter like they did,” Cardina said. “We started to fight back a little bit late but the whole was pretty deep at that point. We rarely got all five guys at once really just running our stuff the right way and being intense enough to do the things that we needed to do. It wasn’t all there tonight.”

Fairport played Independence nearly even during the second and third quarters but the early deficit proved to be too much to overcome.

“We picked up the intensity,” Cardina said. “We switched up our defense a little bit and got some guys to do something different mentally and got them a little bit more engaged. We felt like even though we played them even, it was partially due to Independence being up so much they were able to play a little bit looser and give up a couple buckets here and there. We wanted to chip away three, four, five and six points each quarter and we weren’t able to do that.”