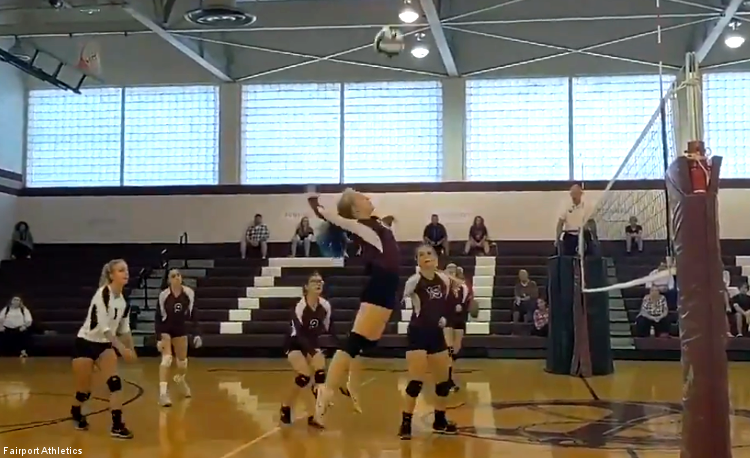 It took exactly one month for Fairport’s volleyball team to win a match this season but it was worth the wait.

The Skippers opened the season on Aug. 19 and on Thursday, Sept. 19 they swept visiting Northeast Ohio Prep to win their first match of the year.

“It was so exciting seeing the girls get their first win,” Fairport coach Kate Selleny said. “They work so hard day in and day out they really deserved it. I think it refueled that fire, it reassured them that their hard work is not going unnoticed.”

Despite losing 11 straight matches, the Skippers never lost focus or their purpose for playing.

“Everybody’s attitudes were so great,” Selleny said. “They had each other’s backs. When one person stepped back, five others step forward. Their teamwork, togetherness and overall attitude were something that I have been asking for from them and it was nice to finally see it all come together.”

Throughout the first month of the season, one or two different players stepped up in each match. That wasn’t enough as it takes an entire team effort to overcome the adversity faced in each individual contest.

On Thursday, the Skippers worked as one.

“Everybody stepped up to the plate,” Selleny said. “We controlled our side no matter what was going on on the other. Everyone played really well together. I was able to put people in different positions to try different things out. With being a young team, it was nice to see the underclassmen step outside of their comfort zones and lead in ways I have yet to see this season. We definitely have a bright future.”

Sophomore Morgan Braemer and junior Faith Tully were among the Skippers to rise to the occasion.

“Morgan Braemer and Faith Tully have been a huge asset to our varsity team this year,” Selleny said. “Last year, Morgan was on JV and Faith did not play. It’s awesome to see them get in their groove, find their voice and play with confidence.”

Freshman setter Sam Yowell also thrived in Thursday’s match and it could be the performance she needs to help her to elevate her game.

“Experiencing her first varsity win is something that I think she is going to take and run,” Selleny said. “She is a very motivated player, willing to go the extra mile whenever asked and is doing such a great job stepping up into a huge role.”

Seniors Hannah Babbitt and Caitlin Potter have played key roles for the Skippers this season but on Thursday, due to the dominating win in the first set, Babbitt and Potter sat out the final two games as Selleny took the opportunity to get several younger players some meaningful time in a varsity match.

“It was a great opportunity to learn to play without them,” Selleny said. “They bring so much effort, talk, passion and intensity to the game that it was nice to see others step up and do the same. The whole group of seniors, in general, brings a lot to this team. They are a group of girls that the whole program looks up to.”

Now that the Skippers have snapped their winless streak, Selleny hopes her girls play with even more confidence the rest of the season.

“With getting their first win of the season, I think again, it re-instills their faith in this program, in me as their coach, in themselves and in each other,” Selleny said. “We had a tournament (on Saturday) and it was just a completely different vibe. It was like, ‘Hey, we can actually do this, we are good enough.’ They played so well.”

Babbitt reached a milestone on Saturday at the Beachwood tournament as she recorded the 1,000th dig of her career.