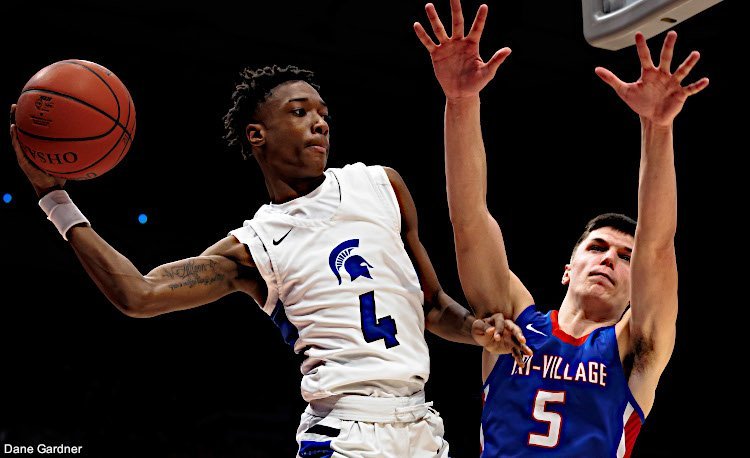 Richmond Heights dominated Tri-Village in the Division IV state championship game at the University of Dayton Arena on Sunday.

The Spartans, who played without All-Ohioan Josiah Harris, defeated the Patriots, 50-29.

“I’m just extremely proud of the players who sacrificed and their families, their sacrifice, our school system, our community and conference, and all the people who support us,” said Richmond Heights coach Quentin Rogers. “I’m really happy for all of them.”

Richmond Heights previously played in the state Final Four in 2019 and 2021 but it wasn’t until Sunday that the Spartans were able to finish the job in bringing home the school’s first-ever state championship.

And they did it with one of the top players in the state sitting on the bench.

Harris suffered a knee injury in Saturday’s state semifinal. He finished that game but after the swelling reappeared that night, a decision was made to play without him on Sunday.

It wasn’t the first time the Spartans were forced to play without their floor general.

Harris sprained his ankle earlier in the season and missed five games. The Spartans won those games, which included a big win over Division I state Final Four participant St. Edward.

“They rallied together and beat St. Ed’s and they won those five games,” Rogers said. “They were used to playing without him, obviously they wanted to play with him and I think a lot of them dedicated a lot of their energy and time to making sure that he ended his career on the highest level.”

That energy showed up early as the Spartans opened the state title game on a 7-0 run and never looked back.

Richmond Heights led after the first quarter, 9-6, and extended the lead to 20-11 at halftime.

As they did in the semifinals, the Spartans dominated the second half by outscoring Tri-Village, 30-18.

Jaiden Cox-Holloway led all scorers with 18 points and Detric Hearst, who started in place of Harris, scored 10. De’erick Barber contributed to the win with nine points, Dorian Jones added seven, and London Maiden finished with six.

The Spartans outscored the Patriots in the paint, 22-12.