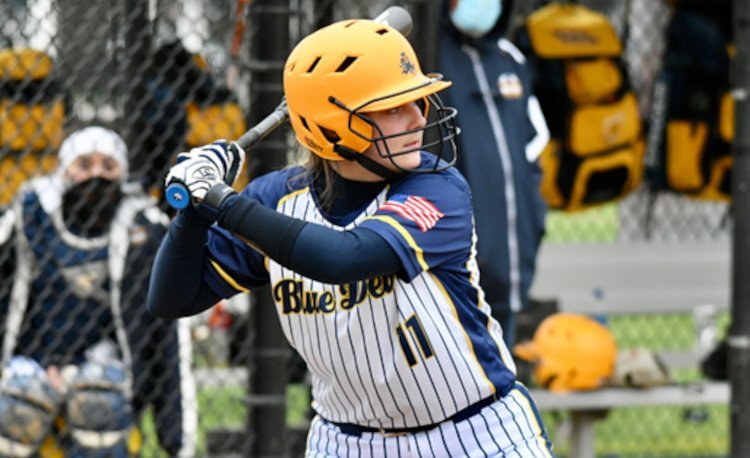 What a difference a year makes.

Last spring, Wickliffe returned just one starter but that didn’t stop the Blue Devils from earning a share of the Chagrin Valley Conference Valley Division title.

This season, the Blue Devils return seven starters from that squad that finished 14-6 overall and 11-3 in league play.

“This gives us a nice foundation to build on,” said Wickliffe coach Marlana Mucciarone. “We lost our starting shortstop and catcher to graduation, but because every year there is a new group of girls, sometimes it’s not as simple as plugging the holes that graduated. Every year, it is like putting together a puzzle and finding the pieces that fit and work together most effectively. So this year, there may be some shuffling of positions to put our best possible lineup on the field. The girls know that they need to have an open mind and be willing to play multiple positions to the best of their ability when asked, because in the end, (we make) decisions based on what’s best for the team.”

Despite returning nearly its entire starting lineup, Wickliffe isn’t without its challenges this season.

“Even our returning starters don’t have a lot of game experience,” Mucciarone said. “They lost a year to COVID and don’t have a lot of time playing together as a team. Experience is one of those things you can’t teach, so the only way to overcome it is by playing as much as possible and learning from both our successes and failures throughout the season.”

Schneider is the ace of Wickliffe’s pitching staff and likely will start every game. She finished the season with a 3.34 earned run average and struck out 118 batters in 119 1/3 innings. She also contributed at the plate with a .366 batting average, eight doubles, and a triple.

“She pitched all but nine innings and she will be in the same role again this year,” Mucciarone said of Schneider, who also earned honorable mention all-district honors. “Our coaching staff has been really impressed with Abby. She is stronger, faster, more consistent, and has more endurance than last year. She also has improved on her hitting. She batted near .400 for much of last season, so I expect she will play a nice role again in our lineup somewhere in 3-4-5 spot.”

Last spring, she batted .500 with seven doubles, 36 runs scored, 19 runs batted in, and 24 stolen bases. She set new school records with six triples and six home runs. Her 19 extra-base hits led the team. For her efforts, she was named the team’s offensive MVP and earned first-team all-district.

“Laylah played a vital role offensively and defensively last year,” Mucciarone said. “She is one of the fastest girls I have coached and has a very smooth, powerful swing. She was the first player I have coached who was selected for first-team all-district honors. In center field, her speed allows her to track down balls that would often be hits in most games. I have very high hope for her this season. She is a very exciting player to watch.”

Butler returns at shortstop after hitting .508 last season with 10 doubles and two triples, and she knocked in 21 runs. Her batting average and RBI total both were team highs.

“Last year, Bry just returned from a knee injury, so we felt the best place for her was at third base which limited her lateral movement until she felt more confident,” Mucciarone said. “Though she played very well at third, she will probably spend most of her time at shortstop this year. Her knee is much stronger and her range has greatly improved. She has the natural athleticism to play pretty much any position, but I feel that she will help the team most by being at short. Offensively, Bry ended with the highest batting average on the team last year. She is very good at putting the bat on the ball and sending line drives into the gaps to move runners around.”

Bunn batted .286 with two doubles, two triples, 16 runs batted in, and 14 RBI. She’ll likely play in the outfield this season.

“Lauren has one of the strongest arms on the team,” Mucciarone said. “Last year, she played outfield along with Laylah and Carla (Sakacs) to comprise probably the strongest outfield I have coached. Right now, I really like the idea of keeping Lauren, Laylah, and Carla together in the outfield because they complement each other very well. Lauren not only covers a lot of ground but can throw a strike to home with no problem. She is also another one of our versatile athletes. If needed, I can move her without hesitation to the infield to play first or short. At bat, Lauren made huge progress from the beginning to the end of last season. This year, she has been one of the hardest workers at improving her swing. She is asking questions and always asks for more reps. I expect her dedication and persistence will pay off this year.”

The first baseman/pitcher batted .388 with seven doubles, a triple, 21 runs scored, and 18 RBI.

“Mackenzie has a high softball IQ,” Mucciarone said. “Last year, she started at first base and was an emergency pitcher. This season, she will once again start at first. However, Mackenzie is one of the few players in our program who plays softball all year. This has helped tremendously in her development, especially at pitching. With the strides Mackenzie has made in pitching during the offseason, we hope to use her strategically or to give Abby a rest when needed. Offensively, from the beginning of her freshman year to now, I am amazed at how much faster her hands get through the zone to contact. She puts the bat on the ball and is a tough out. She played a significant role in our lineup last year, but she will be near the top half of the order this year.”

Senior Haylee Timothy and Sakacs are Wickliffe’s other returning starters.

Timothy batted .286 last season. She is projected to play second base and catch.

“Haylee is one of the most versatile players I have coached,” Mucciarone said. “She also has very good athleticism. Since her freshman year, she has played outfield, infield, pitcher, and catcher. Haylee is willing to do whatever is best for the team. Last year, she spent most of her time at second base. She also pitched nine innings and caught a little too. This year, she will be in a similar role. She will be a leader on the field at second, but will be ready as a backup catcher if needed. Offensively, Haylee has been trying some new techniques and we are optimistic about her utilizing her speed and moving runners into scoring position.”

“Carla started in left field as a freshman last year and I would like to keep her, Laylah, and Lauren there again this year for continuity,” Mucciarone said. “Carla is a good all-around player. She is very athletic, covers a lot of ground, has a strong, accurate arm, and is a good base runner. She is very detail-oriented and always strives for improvement. She is a very conscientious and coachable player. Though she has played mainly outfield, I could move her to the infield if needed. Offensively, she has been working diligently on improving her technique and contact point, which I expect will make a big difference for her this year.”

“Emma spent most of last season as a utility player,” Mucciarone said. “She spent time in the outfield, third, and second. One of Emma’s strengths is putting the bat on the ball. This earned her offensive opportunities as the designated player last year. She has been working hard and improving her skills and I think when given opportunities, she will make the most of them this year.”

Freshman Maddie Kita won the starting job at catcher and junior Madison Nicholson will play third and can catch.

“Kita) has a good attitude and willingness to learn,” Mucciarone said. “(Nicholson) is strong, quick, and athletic.”

Freshman Savannah Javins will see time in the circle and juniors Ashlyn Friel and Amarriys Brooks, and sophomore Kylee Janey will provide the Blue Devils with depth. Friel and Brooks are outfielders while Janey can play in the dirt or the grass.

“I feel like I say the same thing every year, but in order for us to be successful we need to mesh as a team,” Mucciarone said. “We need to be open and accepting to new or different roles as we find what works for us this year. We need confidence, consistency, and leaders to emerge. The girls need to believe in themselves and their abilities. We need to translate the hard work and fundamentals from practices to games. To do this, we need to improve our mental toughness.”

With a relative lack of playing experience, the Blue Devils have focused on the mental side of their game to complement the hard work they have put in swinging the bat and shoring up their defense.