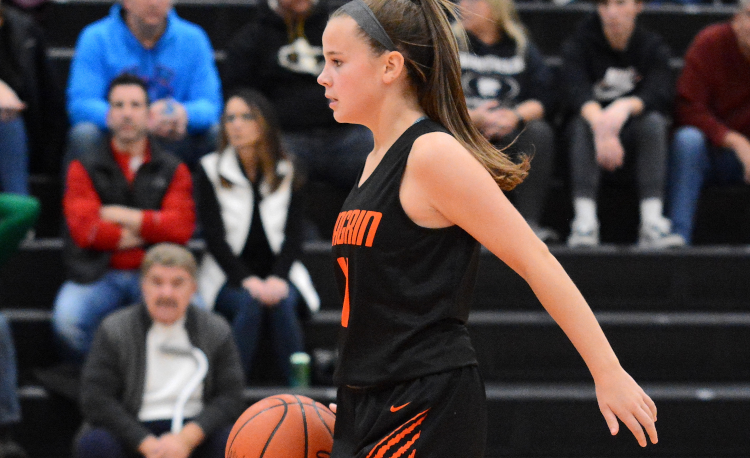 Bella Dalessandro and Carolyn Becnko both scored in double figures to lead Chagrin Falls to a 48-41 win over visiting Trinity in a Division II sectional semifinal on Saturday.

The host Tigers overcame a Trinity third-quarter run to pull out the win.

“Several athletes stepped up and made key plays at critical points in the game,” Chagrin Falls coach Brittany Anderson said. “We knew that we were going to weather a run at some point, which happened in the third quarter, and we were able to keep our composure. We came together the last two days in practice and we played as a cohesive unit today. Everyone was bringing the energy and working to help one another out. I’m so proud of how we played as a team.”

Dalessandro scored 11 of her game-high 17 points in the second quarter as the Tigers took a 24-11 lead into halftime.

Those points were the result of a stifling defense and opportunistic offense.

The Trojans rallied in the second half and took a 36-35 lead into the fourth quarter. Rani Thigpen led the Trinity charge with 15 points and Nina Scaparotti added 11.

Chagrin Falls regrouped and outscored the Trojans the rest of the way, 13-5.

Defensively, Julia Santamaria and Katie Kwasny stepped up to force some Trinity turnovers and the duo also contributed with six and four points, respectively.

“Julia Santamaria and Katie Kwasny played great help defense inside and, along with Lily Karyo, boxed out so well,” Anderson said. “Julia and Katie found open looks on curl cuts offensively and Lily knocked down two big shots for us. Carolyn Bencko found her stride in the fourth quarter and closed out the game on the free throw line. Peyton Gellin locked the game up for good with a steal and layup.”