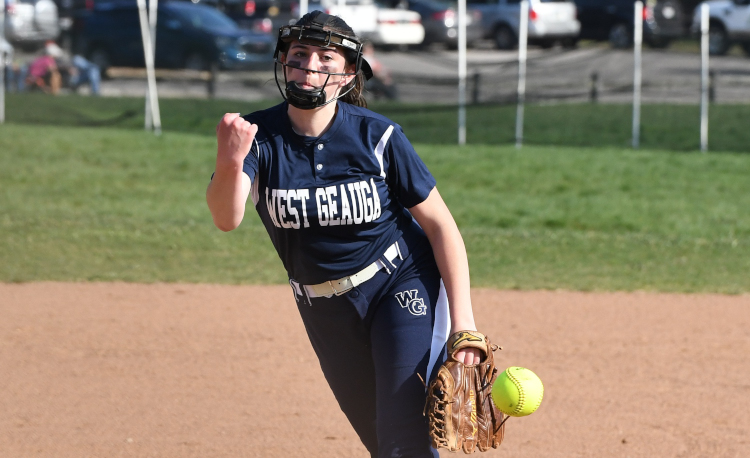 West Geauga’s 15-5 win at Wickliffe on Tuesday shook up the standings in the Chagrin Valley Conference Valley Division.

Frankee Flesher and Tara Gall both hit home runs for the Wolverines, who pounded out 13 hits, including five for extra bases, in the win that left the division in disarray as four teams are within two games of first place.

West Geauga scored two runs in the top of the first when Flesher doubled and Gall later homered in the inning. Layla Ruscin’s leadoff homer in the bottom of the inning pulled Wickliffe to within 2-1, but that’s as close as the Blue Devils would get.

The Wolverines scored four runs in the top of the second and added eight in the third to pull away from their hosts.

Three walks loaded the bases with two outs in the second for Keira Williams, who singled home two runs. Shae Malone then hit an RBI double and Gall walked to reload the bases. Madison Fink then drew a bases-loaded walk to make it 6-1.

Haley Ottman and Julia Clark led off the West Geauga third with back-to-back singles and Jordan Bullis was hit by a pitch to load the bases with no outs. Flesher cleared the bases with a grand slam. Williams then singled and Malone was hit by a pitch. Fink followed up with an RBI single and Lauren Kretschman doubled. Ottman closed out the scoring in the inning with a two-run single to push the Wolverine lead to 14-1.

Wickliffe, who entered the game in sole possession of first place, scored two in the bottom of the third when Lauren Bunn reached on an error and Ruscin and Bryanna Butler hit back-to-back singles.

Kretschman singled and scored on Ottman’s sac fly in the West Geauga fifth and Wickliffe scored two runs in the bottom half of the inning after three walks loaded the bases and Kaylee Lauriel singled and Mia Welms reached on an error.

With the loss, Wickliffe dropped to 5-1 in league games. The Blue Devils are ½ game behind Crestwood, who is 6-1 in Valley Division contests. Wickliffe has a 7-4 win over Crestwood but the Red Devils beat West Geauga, 4-3, leaving all three teams in a race for the league title.

West Geauga is 3-2 in league games. The Wolverines split the season series with Wickliffe and get another crack at Crestwood on May 4.

Wickliffe and Crestwood will play the second game in their season series on April 27. The winner will have a clear path to the league championship, provided it doesn’t lose another conference game.

Then there’s Berkshire, who is 3-2 in conference affairs. The Badgers need some help to win the league title outright but they control their own destiny in earning a share of the league crown as they have two games remaining against West Geauga and one each against Crestwood and Wickliffe.

Here’s a look at the remaining schedules for the four teams in contention for the CVC Valley Division title:

League Title Scenario: Must win out to finish 8-2 to earn a share of the league title; to win it outright, Crestwood and Wickliffe also need to lose another game.

League Title Scenario: Win out to finish 8-2 and Wickliffe must lose again to earn a share of the title.

MORE ON THE GAME

. @WestGAthletics coach Bob Leppla loves the energy and approach his team came with today in a victory over @WHS_Blue_Devils pic.twitter.com/zT1m6imVw8

Frankee Flesher and Haley Ottman of @WestGAthletics talk about their team’s sense of urgency and performance in a win over @WHS_Blue_Devils today. pic.twitter.com/AJvN4GTnfg

Frankee Flesher of @WestGAthletics with a grand slam. Wolverines up 10-1 in @WHS_Blue_Devils in the third pic.twitter.com/z8SdAO2LQK